New York City's famed Chrysler Building is up for sale for the first time in over 20 years. According to the Wall Street Journal, the art deco office tower’s current owners officially placed it on the market, though the building's value has yet to be released. Designed by William Van Alen, the building was bought by Tishman Speyer in 1997. As an iconic part of the New York skyline, the building is admired for its distinctive ornamentation based on Chrysler automobiles.

The Chrysler Building was designed to be the world's tallest building, but remained so for only eleven months until it was surpassed by the Empire State Building in 1931. Costing a total of $20,000,000, the unique skyscraper is made with 29,961 tons of steel, about 3,826,000 bricks, and 5,000 windows. The building is most recognizable for its crown, which is clad in Nirosta steel and with triangular windows. To create this Art Deco masterpiece, tradesmen with specialized skills gathered on the site, coordinating between contractors, builders, engineers and other building services experts. In 1976, the Chrysler Building was declared a National Historic Landmark.

The Chrysler Building is being sold by current owners Abu Dhabi Investment Council, which purchased the tower in 2008 for $800 million. The sale of the historic building will be marketed by commercial real-estate services and investment firm CBRE. 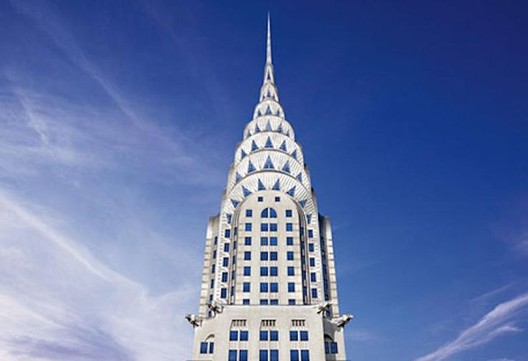