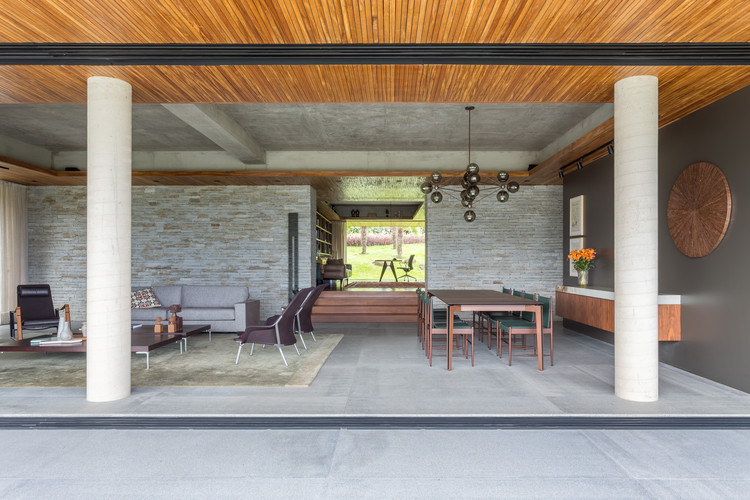 Text description provided by the architects. Situated in the neighborhood of Morro do Chapéu on the outskirts of Belo Horizonte city, the project of Casa Viga started in a peculiar way, since there was already part of a concrete structure (foundation, floor slabs, and pillars) executed on the site. The clients no longer wanted to continue with the original project of that previous structure, although they wish to preserve it in order to minimize construction costs. Considering this, a new project was developed in association with the preexisting structure.

Two of the main features of the house were defined by these conditions: the site plan of the project centralized on the ground with a slope of 2,000.00m², and levels of existing floors (1 lower level initially designed for a games room and 2 other main levels with a small difference of 80cm between them).

It was defined from these premises and also from the solar orientation of the place, that the house would have an intimate area facing a front garden of 20 meters (facing north) and a social area at the back, with 27 meters and the best view (facing south). The garage of the house was defined by taking advantage of the pre-existing lower level.

This sectorization was reinforced by the small difference in level between the floor slabs - at the highest level lies the intimate area and at the lowest level the social and service area. The two entrances to the house, the social and the private (garage) were located at opposite ends of the land, separated from the house by two walls that rise from scratch and grow as the terrain in slope descends. The volumetry is composed of two inverted triangles, one defined by the metallic roof with a slope of 6%, and the other defined by the stone walls that separate the front garden from the entrances of the house.

Internally the house is characterized by large spaces, but without excessive areas, with its social zone surrounded by a generous veranda, where at one of its ends was located the barbecue area, contiguous to the kitchen of the house. The owner's office, located in the intimate area, has large sliding doors that allow the visual interconnection between the two gardens when opened.

Also part of this project, there was a very precarious little construction in the back of the site, which instead of demolishing it, the clients requested its renovation to become a guest loft. The building was located at the back of the site, close to neighboring buildings and at a level well below the main house, which created an image of overlapping roofs.

This led to the idea of recreating the original typology of a house with a gabled roof, but in this case, entirely covered with white metallic tiles, which was also a material used on the roof of the main house. Unlike the main house, where the main openings face north and south, in this annex, the glazed openings face east and west, and the facades covered with tile, face to the main house and the neighboring house, providing greater privacy for all.