Yong Ju Lee Architecture and Atelier KJ have created "Elusive Boundary" for the Korean Pavilion at Expo 2020 Dubai. The project is designed as a place for radical encounters in different fields. The main theme of the Korean Pavilion, Mobility, is defined as a new space of possibility created by movement between territories and escape/expansion to new territories. The movement defined by new mobility is not linear, but a simultaneous event between territories. 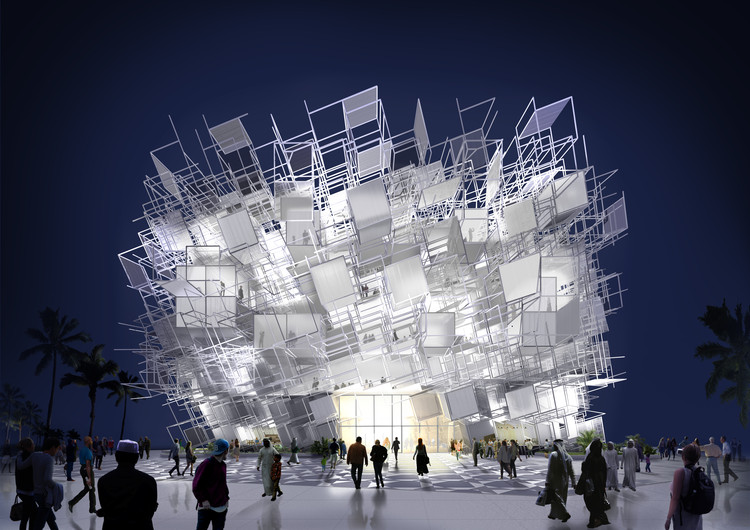 Elusive Boundary, the Korean pavilion for Expo 2020 Dubai suggests a physical place by this new territory. This space is created from the collision of two coordinate systems (one is orthogonal system; the other is a rotated system of 15 degrees in z-axis and x-axis). The second system expands continually, becoming an independent geometrical structure. It behaves load bearing structure by connecting floating lines though the universal joint and supports the whole building as the main structure frame. Two coordinate systems stay in each territories (the orthogonal structure is occupied by programs; the other becomes skin and structure), however, the expanded boundary where two meet creates new space by supporting each other. And this space becomes stable by itself with the tangled geometry

Virtual Mobility occupies the space as the architectural program resembling its spatial quality. While it is independent architecture of Korean Pavilion in Dubai, the mirrored images, or twin pavilions are located in different places in Korea. Two types of pavilions in different regions communicate through sensors and cameras presenting each other’s environment to make visitors experience. Smart devices and sensors such as VR machine and hologram make it possible to interact with the other side.

The boundary expands between the exterior and the interior and it makes hard to read the clear boundary of the building. Visitors experience and perceive the building as floating light mass. As a unique ornament, fragmented skin becomes projected screen for a dreamlike image which is hard to be defined by floating particles, different from traditional projection. Experience at inner and outer space is displayed as an exhibit. And it creates direct communication between visitors inside and spectators outside though translucent skin. 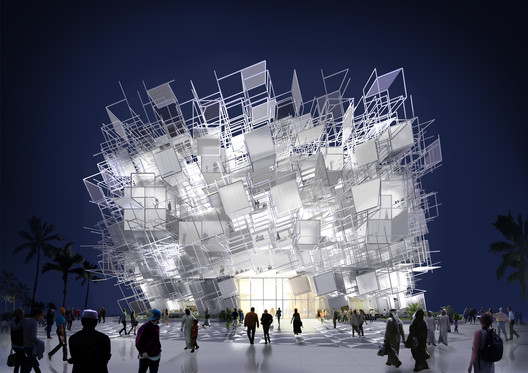