Zaha Hadid Architects and A-Lab have been announced the winner of a competition to design two new metro stations in Oslo. The stations, Fornebu Senter and Fornbuporten, are to be part of Oslo's new Fornebubanen line, connecting a major existing rail interchange to the Fornebu Senter, a major shopping center in the city. 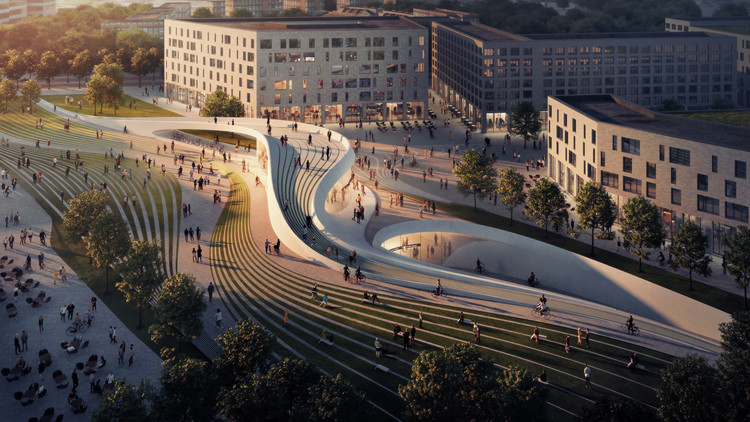 The Scandinavian city has experienced significant growth in the past 15 years (though has somewhat plateaued in the past two years); the Oslo Municipality is expecting more than 80,000 new residents to settle in the city by 2040. ZHA and A-Lab's two stations are just a small part of a masterplan strategy that will ultimately connect the Fornebu peninsula to the existing city center. This urban growth will ultimately comprise 6,000 new homes and civic, cultural, and corporate developments to support 25,000 new jobs.

But this growth, while undoubtedly positive, will encroach on the region's rich natural landscape. ZHA and A-Lab's design takes inspiration from Norway's nature in an effort to retain some element of the landscape as the city develops. In particular, the Fornebu Senter station evokes the country's famous fjords and canyons, with a flowing pseudo-natural landscape providing pockets for public gathering.. The fluid landscape lifts on either end of the plaza to form the entrances to the station. In the summer months, the area will be a hub for sun-seekers; in the colder months, the wide plaza is intended to evoke a wintry landscape.

The Fornebuporten station, by contrast, responds directly to its urban setting. Looking south from the station, visitors will find an orthogonal pavilion and public square that fits seamlessly in the structured geometry of its surroundings. To the north, the station will open onto a public park capped with an oval-shaped pavilion.

Noting Oslo's daylighting extremes, the design teams sought to reflect the changing sky in the entry portals to each station. Atmospheric lighting within the tunnels themselves will shift in accordance to the time of day - a design move supported by numerous recent studies on circadian rhythms.

The proposal for new Fornebubanen stations comes at a crucial moment for the city. "People have been waiting for the Fornebubanen for a long time," explains A-Lab founder Geir Haaversen. "The design of these stations will be crucial for the development of their locations." 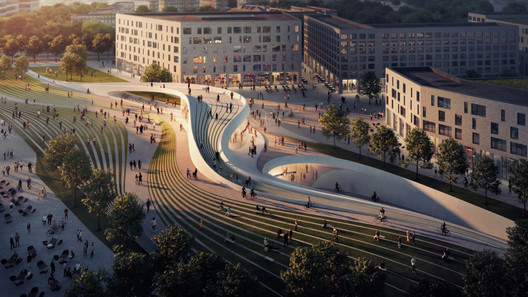