The Metropolitan Museum of Art in New York City has selected Kulapat Yantrasast and wHY Architecture to renovate its Michael C. Rockefeller wing. With arts produced in Africa, Oceania and the Americas, the 40,000-square-foot wing is located on the southern side of the Fifth Avenue museum. The $70 million project aim is showcase the collection of arts and artifacts from sub-Saharan Africa, the Pacific Islands, and the Americas.

Almost 50 years after the founding of the met’s curatorial department on the arts of Africa, Oceania and Americas, the new AAOA renovation will reimagine the galleries to draw on the architectural traits of the regions. Kulapat Yantrasast commented on the renovation of the galleries, stating that, "we will be seeking to illuminate their artistic brilliance by invoking a sense of place through referencing architectural vernaculars relevant to each segment, while also tethering these aspects to historical movements."

Daniel h. Weiss, president and CEO of The Met, said that, "by ushering artistic traditions of three-quarters of the globe into the met, the building of the Rockefeller wing helped define us as an encyclopedic fine arts museum. Its expansive and diverse character uniquely resonates with our global city. The renovation of this suite of galleries will at once make a unique and timely civic contribution to our community and immeasurably enrich and deepen appreciation of a vast swath of the world’s artistic dynamism."

The project is one part of a larger museum plan, including the renovation of the British decorative arts and sculpture galleries, updates to the European Paintings galleries, and renovation of the Modern Wing.The AAOA department was established in 1969 after former US vice president Nelson Aldrich Rockefeller donated his fine-arts survey of non-Western art traditions. The collection included African and Oceanic works that were not yet represented in the museum, and the addition prompted the start of the new wing. The renovation of the Rockefeller wing is set to begin in late 2020, and aims to be complete in 2023. 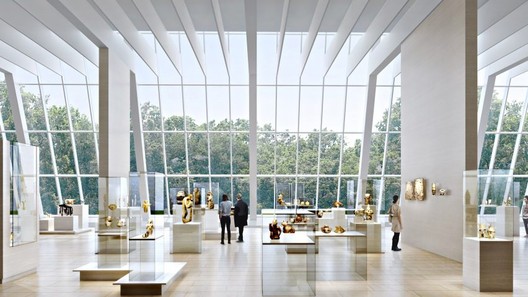