The Menil, notable as the first public museum in the US dedicated to the art of drawing, was founded in Houston by art collectors and philanthropists John and Dominique Menil in 1987. The collection has been comfortably ensconced in Houston’s Montrose neighborhood since 1988, in Italian architect Renzo Piano’s first American built work. The building strikes a fine balance in scales, negotiating its institutional nature with its residential context. It’s this complexity - and its uniquely focused program - that made an addition such a complex challenge. “We traveled to see precedents,” Johnston Marklee co-founder Sharon Johnston says. “The research was intense, but we didn’t find one building that set the precedent.”

Drawings, while rich for the viewer, are a challenge to preserve and display. Light and humidity in even small amounts can quickly degrade the quality of a drawing. Houston has both in spades. As a result, Johnston Marklee’s addition for the Menil had to be cave-like but not cavernous; a kind of architectural cocoon. It’s been a great success. “This quietly innovative architecture of the Menil Drawing Institute allows us to make drawing, the most personal of all artistic practices, accessible as never before, to artists, to scholars, and to the public,” said Menil Collection director Rebecca Rabinow.

But perhaps the greatest achievement of Johnston Marklee’s building is its ability to elevate not itself, but its subject. Says Aaron Seward in Metropolis Magazine, “...the building also gives the Menil something that it desperately needed: more of itself.” 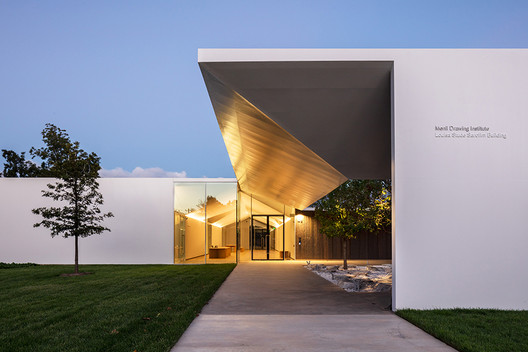