Alain de Botton’s Living Architecture project - a joyful, democratically-minded concept to share quality architecture in the UK - was borne out of personal crisis. The Swiss-born philosopher and author gained fame in both popular and architectural circles following the release of his book, "The Architecture of Happiness."

The book was immediately successful (movie buffs may recall its brief cameo in the 2009 film 500 Days of Summer), but the response unsettled Botton. “...However pleasing it is two write a book about an issue one feels passionately about," he explained to Assemble Papers, "the truth is that - a few exceptions aside - books don’t change anything. I realized that if I cared so much about architecture, writing was a coward’s way out; the real challenge was to build.”

More specifically, the real challenge was to build well and build openly. So much of architecture (particularly at the domestic scale) is held privately and exists only in staged photos to the general public. Even in this typology photos focus more on the interplay of light, form, and material, rather than on domestic scenes. People are an afterthought, used more to indicate scale than to suggest animation. It's no wonder "architecture" seems out of reach.

Botton's answer to this challenge was Living Architecture, a series of homes designed by architects available to the public for rent and deployed across the UK.

The isolated and occasionally mundane locations of the homes are by intention. Botton posits that much of the UK’s reticence toward modern architecture stems from the fact that, for the majority of people, modern is synonymous with either luxurious mansions or decrepit housing estates. In short, either unachievable or undesirable. But there is a middle ground, and Living Architecture aims to make it more visible to the general public.

As Peter Zumthor’s Secular Retreat quickly approaches completion, it’s an opportune moment to look at the variety of interpretations the chosen architects have of a modern, middle-class home. And despite the provocative nature of many of the projects, it’s a more sensible experiment than it might initially seem. So much of architecture depends on outside impressions and staged glimpses. Experience - even only briefly - offers a more genuine impression of how architecture can be interwoven in daily life.

With the UK's housing crisis deepening, perhaps it's wise to not just make plans and design buildings but feel them also. Architecture can - and should - be an active element in enhancing the quality of life.

Zumthor's house lies in the hills of Devon, in an undulating landscape of fields and valleys. Like much of his oeuvre, Zumthor's Secular Retreat is a delicate balance between architecture and the environment, revealing how good design can be an inextricable part of its context.

FAT, the legendary London studio, created this house in Essex with artist Grayson Perry as their last official work before disbanding. The house is sumptuously decorated and references a wide range of architectural movements and contexts - not least among them Essex itself.

Located on the shingle beach of Dungeness, NORD's Shingle House is one of only a few structures in the area. The house is clad in tarred black timber, creating a strong and geometric silhouette in the empty landscape. Inside, the timber panelled walls are left white to create a bright and light-filled space for reflection and relaxation.

John Pawson, the famed British minimalist behind London's Design Museum took a characteristically restrained approach to his project. The house draws inspiration from Walden, it's isolated and insulated location providing the ideal space for a calm and reflective retreat. Indeed, the house very nearly blends into its setting, with the dark exterior brickwork matching the blackened gorse of the surrounding fields.

MVRDV's take on the challenge is arguably the outlier in the set. Seemingly mundane from the front (the entry elevation is reminiscent of a child's drawing of a house), the house then extends backward to cantilever precipitously off the edge of a hill. The cantilever is both a dramatic architectural move and creates a second, exterior space for living. It's a bold interpretation of what a house can be: a place that is as animated as the lives it houses.

Hopkins Architects' Long House, takes a traditional and basic housing structure and pulls it apart, creating a clerestory level that admits light into the stone-clad house. The structure - one of the largest in Living Architecture's portfolio - fits comfortably in its agricultural context.

The Dune House, by Jarmund / Vigsnæs reinterprets the undulating form of a dune in angular geometries. Multiple pitched roofs cover the open plan structure, which is finished inside with light timber and board-formed concrete. 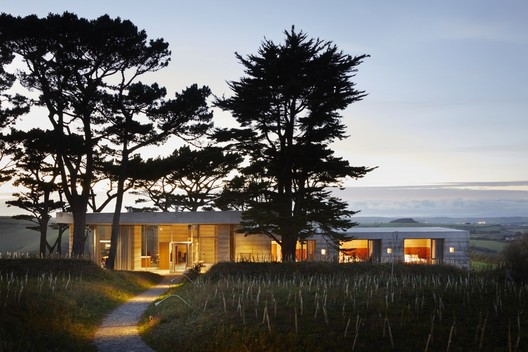