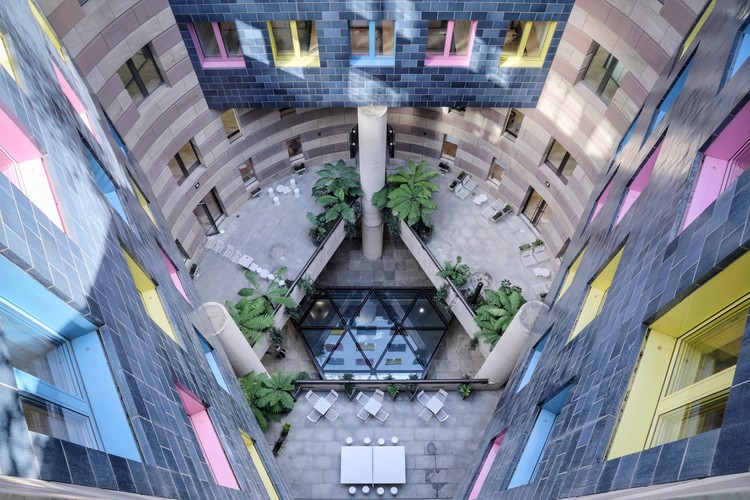 The sensitive renovation has culminated in large lounges offering views of the scheme’s colorful, blue ceramic tiled rotunda. The prow of the building features boardrooms, wellness spaces, and intimate lounges, positioned to exploit views of Bank Junction and central London.

The interiors are adorned with tongue in cheek artwork referencing the surrounding area, such as shoes stepping in gum, workers sliding on banana skins, and “a neon depicting a London cab with wheels alight referencing the phrase ‘burning up the streets of the city’.”

We took advantage of this beautifully designed James Sterling building, harnessing the natural light that pours into the space, and made sure every part – even the prows of the building – were thoughtfully designed to foster collaboration, productivity, and our home-from-home feeling. Bold colors and homely furnishing can be seen throughout the building, where the scheme was inspired by the postmodernist era of design so thoughtfully conceived by Stirling. The artwork – created by our own in-house Arts & Graphics team – resembles workers wandering the nearby streets, bringing the vibe of Bank into the space.
-Andy Heath, Design Director, WeWork

The scheme is one of 280 WeWork locations across 77 cities, providing space for startups, freelancers, small businesses, and Fortune 500 companies. 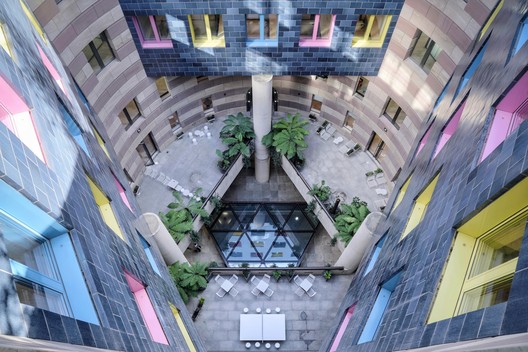