COOKFOX Architects and Oxford Properties have reimagined New York's St. John’s Terminal as a workplace of the future. The 1.3 million square foot proposal aims to connect the Hudson Square neighborhood to the waterfront at the end of The High Line. Combining outdoor space and greenery with 100,000 square-foot floor plates, the project reinterprets the industrial past of the former freight terminal. The project was created to shape how businesses innovate and create between Lower Manhattan and the waterfront. 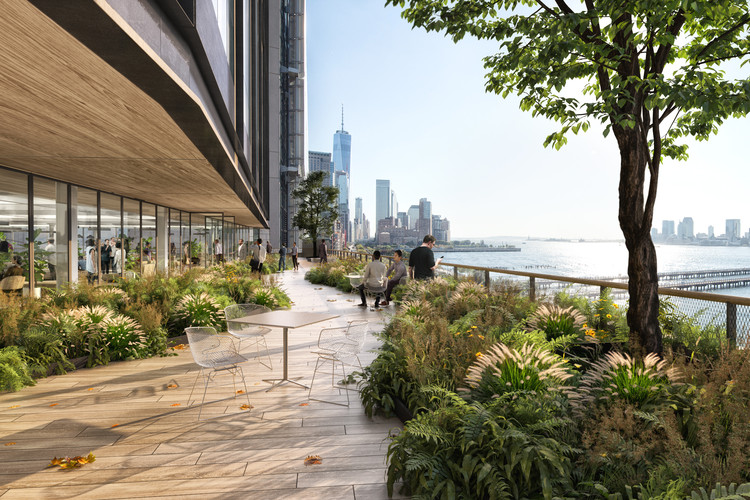 At St. John’s Terminal, the design from COOKFOX celebrates the site’s heritage. The former terminus of the High Line was once a conduit for daily goods distributed throughout NYC. The legacy of its railway heritage can still be seen embedded in the building’s structure. Located at 550 Washington Street at the corner of Houston and West Streets in Hudson Square, the building encompasses two entire city blocks in Manhattan - adjacent to Hudson River Park’s Pier 40 and at the intersection of the West Village, SoHo and Tribeca.

As the former freight terminal for the High Line, the warehouse-style building was originally developed as a distribution hub of daily goods. The original railroad tracks remain visible throughout the unusually wide building that was first designed to hold up to 227 train cars. The first renderings of the building reveal a 12-story workplace with 100,000-square-foot floorplates, a rare find in the Manhattan marketplace. The building’s façade will allow for more than 400 linear feet of unobstructed west-facing views of the widest sunset in New York City. Renderings of the project highlight the building’s biophilic design, which will produce numerous outdoor retreats for building tenants, including a greenscaped rooftop and terraces overlooking the river.

“We felt a tremendous responsibility to re-imagine St. John’s Terminal in an authentic yet modern way,” said Dean Shapiro, Head of US Developments at Oxford Properties. “St. John’s Terminal has a long history as a hub of innovation and productivity. Its unique form allows us to create workspaces that reduce the friction of expansion and change over time, so tenants can focus on productivity. Our intent is to return the building to a place of prominence for the next generation of New York’s economy. With Hudson Square emerging as one of the city’s most exciting neighborhoods, the timing is perfect to activate this building in a way that connects the community to the greenway and Pier 40.”

In the first phase of development, the overpass covering Houston Street at the North side of the building will be removed, exposing the original railroad tracks and connecting the waterfront and Hudson River Park to local residents and visitors.

“St. John’s Terminal once formed the end of The High Line and our design will preserve the history and authenticity of this important piece of rail infrastructure that once connected the world to New York City. By opening the site with the removal of the overpass and incorporating the rail beds, we’re connecting the building with the neighborhood, and at the same time creating a workplace that is connected with nature,” said Rick Cook, Founding Partner, COOKFOX.“This building will be the next generation of high-performance, biophilic workplace to support wellness and productivity for occupants, with access to outdoor gardens for the building tenants and new public spaces that will improve access to Hudson River Park.” 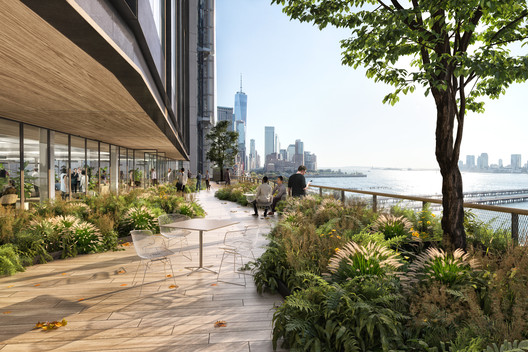