Save
Fentress Designs Norwegian Chancery in Washington D.C. as a Homage to National History
Share
Or
Copy

Fentress Architects has revealed their design for the expansion of the Norwegian Chancery in Washington D.C. A prominent new addition to the embassy’s Washington D.C. campus. The scheme expands the architectural language of the existing embassy buildings, embracing contemporary design techniques within the context of traditional bureaucratic architecture.

Fentress’ design integrates materials of Norwegian cultural significance as prominent features of the façade. The use of Norwegian spruce timber, Oppdal stone, and patinated copper pay homage to the country’s traditions in shipbuilding and woodworking, as well as their abundance of natural resources.

The 30,000 square-foot addition was designed to ignite an intriguing dialogue between the new and the old. Most importantly, the contrast between Fentress’ vision and the existing neo-classical buildings was meant to create a harmonious dichotomy.

While providing significant functional, accessibility, and sustainability upgrades, our architecture will make Norway’s rich heritage visible on one of the most culturally significant streets in the United States and the world.
-Steve White, Principal-in-Charge, Fentress

The Chancery’s curvilinear copper mansard roof encases the entryway while delicately intersecting with the existing garden’s stone wall and connecting the chancery, embassy, and residence inside. The portal welcomes those who enter, guiding visitors into the new courtyard containing an extensive garden, outdoor seating, and a covered gathering space.

Best known for the Denver International Airport, Fentress has established a vast portfolio of design experience. Similar to airports, security and circulation play a key role in the design of an embassy building. A highly-trafficked structure will see visitors, administrators, and political officials pass through the chancery, gaining a glimpse of Norwegian culture and hospitality in America’s capital. 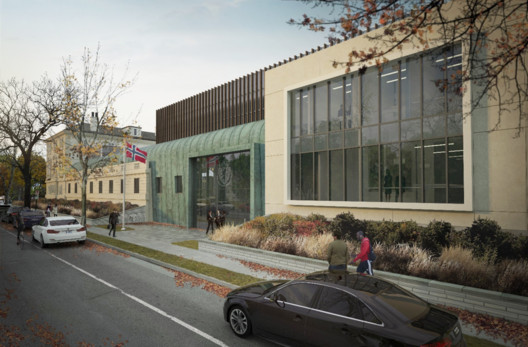