Save
Understanding The Human Body: Designing For People of All Shapes and Sizes
Share
Or
Copy

Herman Miller produces a chair every 20 seconds. How does the company manage to deliver effective answers to each of its thousands of different users? This fast manufacturing process only seems to be the efficient endpoint of a long road of deep studies and explorations with a human-centered approach.

According to Gary Smith, Herman Miller's Vice President of Product Design and Exploration, the company has a long history of research dating back to the 1960s, when the Herman Miller Research Institute was established, initially led by Bob Propst. From its first years, the institute promoted the objective of exploring reality in a global way, expanding the look to "find problems outside of the furniture industry, and to conceive solutions for them." [1]

However, these quantitative general studies are then refined through usability tests with varied users and the input from experts in different areas that complement them with more qualitative data. For example, some tests measure the comfort level a person feels when sitting, while others measure even metabolic variables –such as the Heart Rate (HR), the Respiratory Rate (RR), and the CO2 Output, among others, comparing the performance between different chairs in relation to the user's health. The result of all these processes allows them to define the design brief and to improve the qualities of the products.

'We work with Ergonomists; people who spend their lives studying not only the dimensions of the human body and its differences but also the ways in which bodies move. They study its structure, bones, muscles, and how the body should move to feel comfortable. We also work with Colorists and material experts, who give us a fashion sense and allow us to respond to different and changing tastes. We look for the best creatives and talents from around the world to join us in each particular project,' says Smith.

Nowadays, humans spend a lot of time sitting. Whether in our work or rest moments, times of physical inactivity predominate our lives, and Herman Miller has understood this as an opportunity, rather than a problem.

For people increasingly seduced by computer technology—and the sedentary positions it encourages—seating solutions that benefit the heart might help lower the risk of cardiovascular diseases, and ultimately improve people’s health. [2]

So, this is not just a comfort problem. There are plenty of beautiful and comfortable chairs to choose from, but they don't consider the effects they will have on a person who spends several hours a day sitting on it. The investigations carried out allow their chairs to adapt instinctively to the body and its movements, specifically to the spine, enabling the person to move freely in all directions, without obstacles or excessive efforts. In this way, problems related to static postures during a long workday are avoided, and can even help improve the physiological function of people in sedentary positions.

'The interesting thing is that in thousands of years, our bodies have not changed much. Some of the design parameters change very quickly, such as the preference for certain colors, while others change in a medium clock-speed, like the nature of our homes or the architecture and our built environments. However, there are some parameters that change almost not at all, such as the nature of the human body,' add Smith.

Anthropometry is one of the essential studies promoted and developed by the company, with special emphasis on the diversity of physical sizes that exist around the world. Over the years, the accuracy of these studies has increased, for example, using three-dimensional scans.

People of all sizes and shapes adjust to the generalities of everyday objects. The height of countertops, the legroom in cars, the width of airplane seats, the depth of stairs or heights of handrails—all too often these are designed to the average size of the population. Yet when a product is designed to meet the “average,” then average design is often the result. [3]

Through these studies, designers can identify certain percentages that group the population according to their dimensions and size requirements. In this way, they will effectively respond to the highest possible percentage of potential users (meeting 95 percent in some cases, from a 5th percentile female to a 95th percentile male), based on high adaptability and flexibility, and allowing intuitive user control.

These three factors are essential to consider, even when the design is effective for a high percentage of the population. The specific distribution of weight in a person, for example, will make his or her perception of the comfort of certain traditionally used positions totally different. What for one person feels good, may not be comfortable for another.

The human body and its relation to space: the case of the office

Herman Miller has not only promoted the study of the human being to manufacture independent pieces of furniture but also as a fundamental part of a series of integrated systems to configure habitable spaces, specifically offices. In his book 'The Office: A Facility Based on Change', originally published in 1968, Bob Propst presents strategies to effectively plan and define these workspaces, through an analysis of human behavior which still applies today.

Planning for the office requires an expanded set of skills. Planning is an exercise in futility unless it produces a knowledgeable structure built on an understanding of the key variables: the purpose of the organization; the support of individual performance; the role of facility planning, and the art of pre-gaming. [1]

These 4 keys are in direct relation with the people that will inhabit the workspace daily. Pre-gaming, for example, is used to simulate and model different spatial configurations to test its effective future use, thus avoiding speculation. Propst suggested the joint use of computer software and scale models, allowing a general analysis of space and the possibility of zooming in specific areas for closer study.

The analysis carried out during first years –with the support of a multidisciplinary team made up of psychologists, mathematicians, anthropologists, and other relevant specialists– included aspects like the enclosure and access, the privacy and security, the traffic and the social climate, based entirely on the real user experience. The result was the Action Office System (in its I and II versions), which has now been complemented with the new possibilities offered by its 'brother'; the successful Living Office.

Adaptability, flexibility, and user control... but with a powerful "backbone"

Instead of "providing a formula kind of sameness for everyone" [4] –one of the biggest criticisms that Bob Propst made to the traditional offices of the 20th century–, the furniture and spatial designs that are widely adaptable, flexible, and controllable, can deliver specific and adequate responses to a huge variety of people, bodies, and uses.

The exhaustive research, testing, and input of relevant professionals is essential to achieve these objectives. But in all of them, there is a strong "backbone" which makes them consistent and powerful, maintaining their core qualities even though it can be used in different ways by different users.

Going deep into the received commission is absolutely necessary and facilitates our work as designers. And for that, it's essential to return to the beginning: to take the individual as the starting point.

[1] "The Office: A Facility Based on Change." Propst, Robert. Published by Herman Miller, Inc. 1968
[2] Sitting Can Be Good for the Circulatory System. How the Embody Chair Lowers Heart Rate. <https://www.hermanmiller.com/research/categories/white-papers/sitting-can-be-good-for-the-circulatory-system/> (accessed December 2018).
[3] "The Evolution of Anthropometrics and User Control". The Science and Research Behind the Mirra 2 Chair. <https://www.hermanmiller.com/research/categories/white-papers/the-evolution-of-anthropometrics-and-user-control/> (accessed December 2018).
[4] The Accidental Arrival of the Cubicle. <https://medium.com/robin-powered/the-accidental-arrival-of-the-cubicle-ebc04da7552/> (accessed December 2018). 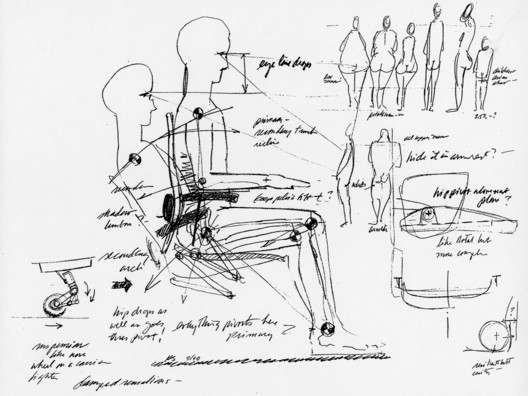