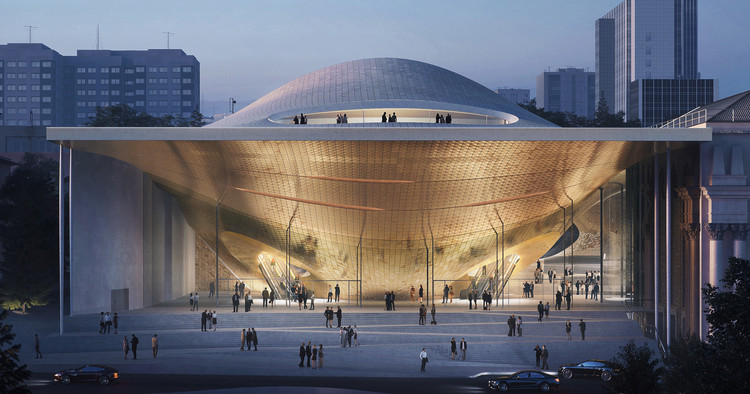 The Zaha Hadid Architects proposal is based on the “properties of musical sound resonance creating wave vibrations in a continuous smooth surface,” translating as a fluid, suspended auditorium element floating above a new civic space, all contained under a large canopy.

The scheme’s centerpiece is a 1,600-seat Concert Hall and 400-seat Chamber Music Hall “nestled within the surface deformations of the suspended canopy.” Elevated off the ground, this element creates an unobstructed lobby underneath, doubling as a vibrant public gathering space for a city whose population has increased by over 10% in the past decade. Atop the scheme, the procession of interconnected public spaces continues in the form of a rooftop terrace overlooking the city’s Church of All Saints.

The proposal will sit in a void between existing heritage buildings and Weiner Gardens, connecting with the adjacent landscape through a transparent glass façade opening towards a renovated amphitheater for summer outdoor performances. As part of the project, the existing concert hall will be preserved and renovated as an “integral element of the new world-class facility.”

Russia has been a formative influence on Zaha Hadid Architects’ creative work. From very early in her career, Zaha was attracted to the Russian avant-garde who conceived civic spaces as urban condensers that catalyse a public realm of activity to enrich creativity and community; allowing space itself to enhance our understanding and well-being. These principles are embedded within the design of the new Sverdlovsk Philharmonic Concert Hall.
- Christos Passas, Project Director, Zaha Hadid Architects

ZHA triumphed over 46 other international teams, in a competition organized by the Ministry of Construction and Infrastructure Development of the Sverdlovsk Region with the assistance of the charitable foundation for support of the Ural Philharmonic Orchestra.

News of the competition win comes weeks after the firm exhibited their interweaving carpet collection for Royal Thai during the 2018 London Design Festival. 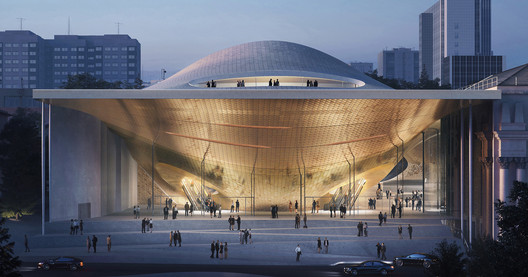