Save
Kazuyo Sejima: "The Building is About the Size, But Also About the Details"
Share
Or
Copy

In 2015, SANAA was selected to design the New National Gallery, after being awarded first prize jointly with Snøhetta. When asked about the verdict by Martha Thorne, Executive Director of the Pritzker Prize and dean of the architecture school at IE University, Baán recognized "it is not common to have two first places. Both [offices] made an excellent work with very playful designs, but in the end the government decided on SANAA."

Regarding the content-versus-container dilemma — "it is a discussion from 10 or 15 years ago," said Baán. Sejima insisted that circulation and natural light are vital features for museums of the twentieth century. "The 19th-century museums [as a typology] did not need natural lighting, but now they need it. They depend on it," said Baán.

When asked about the scale of the museum, Sejima commented "the building is about the size, but also about the details. The scale is just only one part of many things, but fitting it in its surrounding is most important." When Baán asked about the contrast between traditional and contemporary architecture, Sejima pointed out the ceiling of the gothic church that hosted IE University's aula magna to argue that "every period of humankind should have its own voice."

In 2010, Sejima made history by becoming the second woman to win the Pritzker Prize after Zaha Hadid in 2004. Regarding the role of women in architecture, Sejima was asked to share some advice. "Be patient," she said after a long silence. "When I was young, it was hard and I almost gave up, but now I'm very happy to do such a big project."

For more coverage on the Hay Festival Segovia 2018, click here. 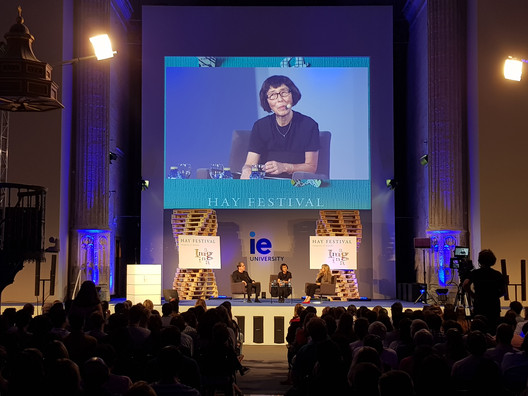