Created as an interactive indoor learning environment, WeGrow was made with a field of super-elliptic objects. The scheme aimed to undo the compartmentalization often found in traditional school environments. The objects create a learning landscape that’s dense and rational while also being free and fluid. Modular classrooms, tree houses and a vertical farm promote an inclusive and collaborative learning environment. Acoustic clouds, natural materials and neutral colors create a calm setting for the child’s focused study. WeGrow hopes the micro school will nurture education through introspection, exploration and discovery.

Rebekah Neumann, WeWork’s founding partner and chief brand officer, describes WeGrow as a "new conscious, entrepreneurial school committed to unleashing every child’s superpowers." She goes on to state the the organization "hopes to reimagine the very idea of a classroom as elementary school-age children begin to identify their callings and apprentice under employees and members already living that dream. Curriculums will be created around meaningful local cultures and environments so that learning can be hands-on and experiential."

The new WeGrow is now welcoming children ages 3 through 9, adding ages 2 and older next year. The school is open to WeWork members, employees, and local communities. 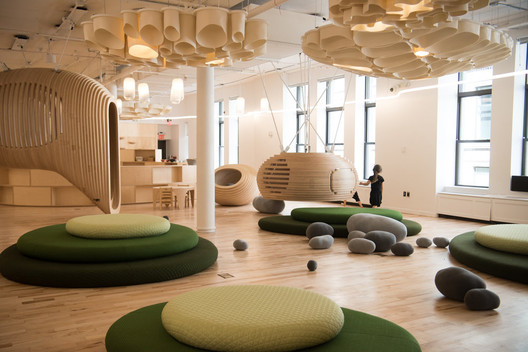