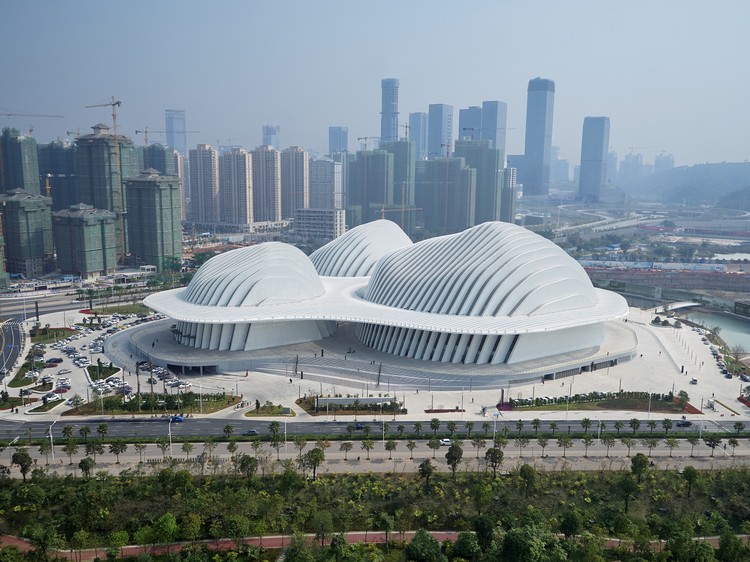 Text description provided by the architects. The Guangxi Culture & Art Center in Nanning has opened its doors. It is a grand theater of the kind that is very popular in China and serves as a venue for a wide range of musical and cultural programs: in addition to classical works in the European tradition of operas, events include concerts, musicals, and gala shows.

Three concert halls have been arranged as separate volumes on a natural stone-clad plinth building that accommodates the service functions. The opera house to the south-west with its 1,600 seats and a 600 square-meter stage opens out to a newly created lake.

Following the tradition of classical opera houses, the seating has been laid out in the shape of a horseshoe. The stalls and balconies are reached via a foyer and an arrangement of stairs. Softly curved wood-paneled surfaces create a warm interior atmosphere, and the reverberation time of 1.5 to 1.8 seconds provides ideal acoustic conditions.

The concert hall with its 1,200 seats is located on the eastern side and has been designed as an oblong hexagon with a rounded stage area. It features an organ with 64 registers and is therefore suitable for a wide repertoire of musical performances ranging from chamber music to symphony concerts by composers like Bruckner. Wide wooden stripes on walls and ceilings provide a certain rhythmic order to the visual appearance.

The smallest hall, with 550 seats, is a multi-functional hall and is located to the north. Its electronically controlled acoustics ensure that the reverberation time can be adjusted with infinite variability. Different stage scenarios for music, ballet, and theater performances as well as fashion shows can be created with the help of lift platforms.

The three venue buildings are unified by a shared, seemingly floating roof. Similar to the facades, it appears as a large structure of louvers, which has been constructed with a steel frame substructure and white folded aluminum panels as cladding. When viewed from the opposite bank of the River Yong or from the approach via Nanning Bridge, the radiant white shape of this outstanding culture center of Nanning and the Guangxi province appears confidently in contrast to its surroundings. Depending on the viewpoint, the silhouette of the building changes dynamically, evoking associations with the natural karst formations that are so typical of the Guangxi landscape. 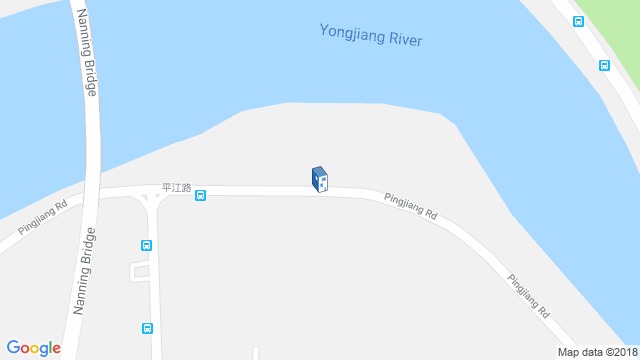 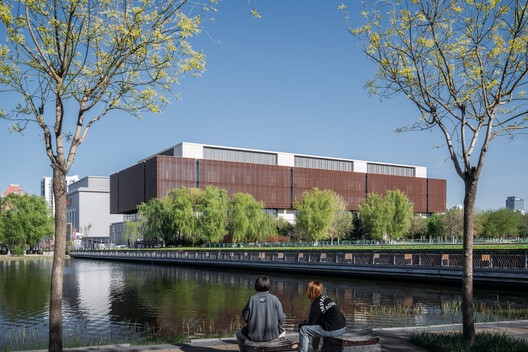 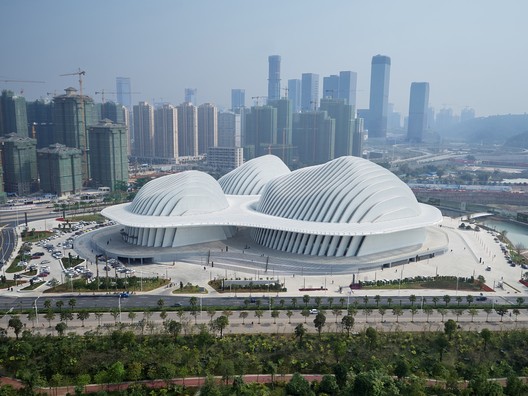