Cobb’s design for One Dalton comes 40 years after he designed another noted Boston landmark, the John Hancock Tower.

For the design of One Dalton, Cobb’s team sought to craft a modern skyscraper “inspired by both Boston’s storied history as well as its progressive future.” A “soft triangle” form features bay window facades to create multidirectional panoramas while maintaining a sleek, clean aesthetic.

The tower’s 160 residences are perched on the tower’s higher floors to maximize views, complete with 11-foot cove ceilings, state-of-the-art kitchens, and private balconies. Beneath, a 215-room Four Seasons Hotel will feature 20,000 square feet of amenity space accessible to residents, including a swimming pool, fitness center, and theater.

Other collaborators for the scheme include Thierry Despont, who is leading One Dalton’s Private Residences Lobby, and landscape architect Michael Van Valkenburgh, who has designed a 5,000-square-foot public park connecting the building to the surrounding area.

Having broken ground in 2015, the scheme is expected to be completed by 2019. 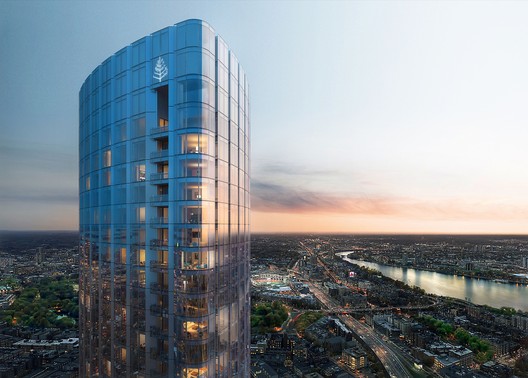