MAD Architects have completed their restoration work on the Kiyotsu Gorge Tunnel in Japan’s Niigata prefecture, transforming the historic lookout tunnel into a trail of artistic spaces. The “Tunnel of Light” was opened as part of the 2018 Echigo-Tsumari Triennale, cutting through 750 meters of rock formations to offer a panoramic view across one of Japan’s great landscapes.

MAD’s scheme seeks to “transform points along the historic tunnel through the realization of several architectural spaces and artistic atmospheres." Inspired by the five elements of wood, earth, metal, fire, and water, the scheme explores the relationship between humans and nature, and "re-connects locals and visitors alike with the majestic beauty of the land." 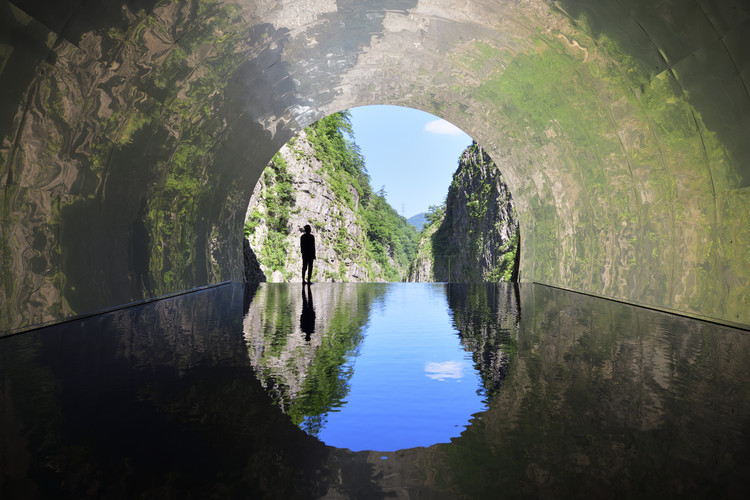 Approaching the tunnel, a small wooden hut contains a café, a shop selling locally-made crafts, and a hot spring foot spa. An opening in the pitched cedar roof, called the “Periscope” sits above the spa, with mirrored lenses positioned to reflect the surrounding landscape. The subtle intervention seeks to “give visitors the opportunity to enjoy the natural scenery outdoors” from the comfort of a warm wooden interior.

The entrance to the tunnel sees a renovated passageway illuminated with a series of colored lights, each defining a lookout point along the tunnel. Described as the “Expression” of the space, the vibrancy of the colors in tandem with mysterious music create a “dynamic ambiance that sparks a certain curiosity of the unknown for those who are wandering through."

The first lookout point consists of a capsule-like structure gently mirroring the tunnel’s silhouette. The wall facing towards the gorge is transparent, with an exterior window covered in metallic film creating one-way views from the inside of the space. The structure seeks to provide “a quiet escape, a place of solitude” questioning how people react when they think nobody is watching.

Along the vaulted ceiling of the second lookout point, “The Drop” features a series of reflective openings described as “windows of uncertainty.” While mirroring the reality of the natural environment, they also appear as surreal droplets of water suspended in time, with a red, fiery hue portraying “an alternative connection with nature.”

The restoration culminates at the “Light Cave” where a shallow pool of water “gently ripples with the breeze of the wind.” The views of the surrounding landscape reflected from the cave’s semi-polished stainless steel lining are cast onto the water, creating an infinite illusion of nature. With “Light Cave,” lightness and stillness sit within a “once dark, dewy tunnel” evoking a feeling of eternal solitude. 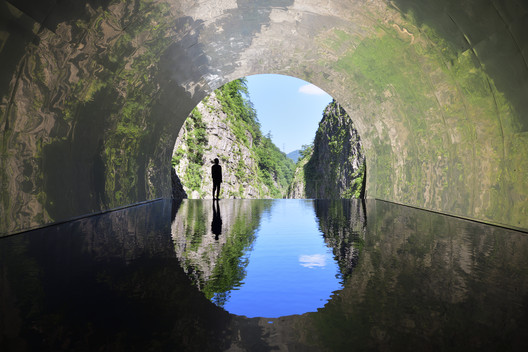