They have used this technique to create a formwork to fabricate an 80 square meter lightweight concrete slab at the DFAB House, the first and largest construction of its kind. The “Smart Slab,” which carries a two-story timber unit above it, merges the structural durability and strength of concrete with the design liberation of 3D printing. 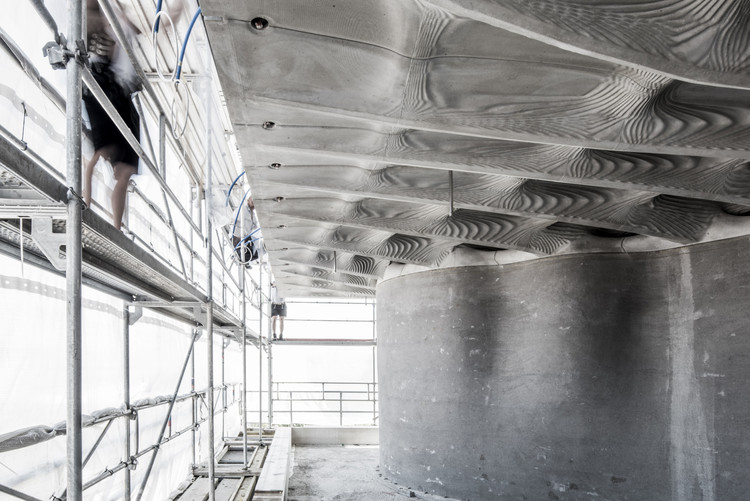 The design team refrained from 3D printing all building components, but rather, created a mold that would produce an intricately-designed ceiling able to maintain its load-bearing characteristics. This is why the team chose to use a large 3D sand printer, whose precision is narrowed down to millimeters. Upon completion, the mold can be dismantled and reused for other projects.

The project’s research group was able to develop a new software to fabricate the mold’s elements. The software coordinates and records all the room’s parameters, resulting in a precise production. The curved wall, which acts as a main support for the concrete ceiling, was accurately scanned to the scale of individual millimeters. As a result, each point in the fabricated element adapts to the slab’s geometry and structural necessities.

After a thorough analysis is complete, a simple push of a button sends the data to the machines to begin the fabrication. During this phase, teams of various industrial fields contributed their expertise to create the Smart Slab. The first team was responsible for the high-resolution 3D-printed sand formworks. Due to transportation and printing reasons, the engineers chose to divide the molds into pallet-sized sections. The second team fabricated the timber form-work using a CNC laser cutting machine. The timber form-work was used on the slab’s upper half, leaving hollow spaces for electrical cables and reducing both weight and material. The designers made sure the final form had embedded spaces for technical installations such as lighting and sprinklers. The production work of these two teams was then combined with the help of a third team, whose responsibility was to work with fiber-reinforced concrete. The first step was to spray the sand mold with the concrete material, creating an organic, ribbed surface. The team then cast the remaining concrete into the timber form-work, creating the final form.

Eleven segments were set aside for two weeks for the hardening process, and as soon as the blocks were ready, they were transported to NEST, the designated site. Installation time on site was reduced to a minimum due to the efficiency of prefabrication planning. The installation team used a crane and steel cables to pre-stress the concrete mold into the structure.

Based on the 3D-printed form-work, the prefabricated concrete elements are optimized as a result of the organic, hierarchical ribbed structure. This structure saves material by efficiently distributing it to the locations of greatest load stress. As a result, together with a post-tensioning system and ultra-high-performance fiber-reinforced concrete, the ceiling is over 50% lighter than its conventional counterparts.
-DFAB HOUSE

Looking to the future, we can only begin to imagine what architects and engineers can accomplish with such a liberated platform.

For the project's development, ETH Zurich credits the following researchers and companies for their involvement: 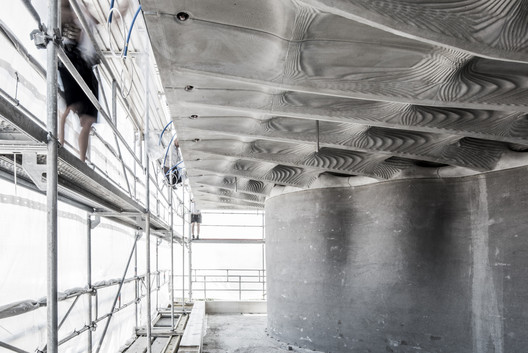