The Battery Atlanta tower will be home to over 900 full-time employees, representing 6% of thyssenkrupp Elevator’s total workforce in North America. When completed, the scheme will include three facilities dedicated to innovation and product testing.

Among the concepts and product pilots to be trialed in the complex include TWIN, a two-cabins-per-shaft elevator system, and MULTI, the world’s first rope-less and sideways-moving elevator system, which we detailed in an article last year. The complex will also be a center for tests to ensure the products adhere to stringent safety requirements.

Our new test tower in Atlanta will be a testimony to thyssenkrupp’s commitment to investing in its global network of innovation centers, which all have forged ever-deepening ties with students and universities nearby. Within our network of spectacular high-speed test towers in Germany and China, the new facility in Atlanta will be the third laboratory for futuristic technologies such as the world’s first rope-less elevator, MULTI, and the proven high capacity, two cabins per shaft elevator, TWIN.
-Andreas Schierenbeck, CEO, thyssenkrupp Elevator

Completion of the tower is expected in early 2022.

Other recent architectural developments of note by thyssenkrupp include their Global Shared Services division in Latin America, designed by Arquitetura Nacional, and completed in 2016. 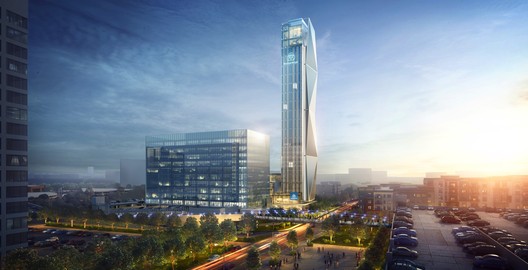