In their latest press release, elevator manufacturer ThyssenKrupp announced new information about their cable-free system that rethinks the movement of the 1853 invention. Allowing for both horizontal and vertical transportation, “MULTI” has the capacity to innovate tall building design through its elimination of architectural constraints such as vertical alignment and elevator shaft dimensions. First unveiled as a concept in 2014, MULTI reported this month that the elevator has been installed into a test building and is soon to be implemented publicly into new developments.

In MULTI, ThyssenKrupp strays away from standard elevator schematics by opting against cables and favoring linear mobile technology. The elevator offers several cabins that work in a loop, similar to the circulation of public transit that moves many cars at once. Using a multi-level brake system, wireless data, and energy management systems, the operation cuts down drastically on user wait time and is environmentally conscious.

This has the capacity to transform the industry at large, changing the way tall buildings are designed, and allowing for much more efficient core designs, as well as better connectivity in buildings said Antony Wood, Executive Director of the Council on Tall Buildings and Urban Habitat (CTBUH).

The elevator continues to be tested at ThyssenKrupp’s innovation tower in Rottweil, Germany where the inaugural run took place. The 246-meter tower houses 12 shafts that allow engineers to test the efficiency of the elevators, with three specifically dedicated to the MULTI system. ThyssenKrupp also uses the facility to test their range of elevator inventions such as cars that reach speeds of up to 18 meters per second.

The video below provides a graphic explanation of the project and an insight into its experiential qualities. Additionally, ThyssenKrupp revealed that the first public building to feature MULTI will be East Tower, OVG Real Estate’s new addition to the Berlin Skyline. Situated next to works such as the Mercedes-Benz Arena, East Tower will be completed later this year.

As technologies such as the MULTI elevator move out of their prototype phase and begin to be installed in built works, architecture will respond to the ever-changing digital possibilities of the 21st-century.

With Recent Innovations, Where Will Elevators Take Us Next?

Many technological advancements have changed the way we design in the past 150 years, but perhaps none has had a greater impact than the invention of the passenger elevator. Prior to Elisha Otis' design for the elevator safety brake in 1853, buildings rarely reached 7 stories.

Elevator manufacturer ThyssenKrupp has unveiled its latest technological advance, a cable free, multi-car, multi-directional elevator that has the potential to revolutionize the size and shape of future skyscrapers. Run using magnetic technology similar to that used by Maglev trains, with each cabin running its own individual motor, the "MULTI" elevator system opens up the potential for elevator cabins to move horizontally as well as vertically. 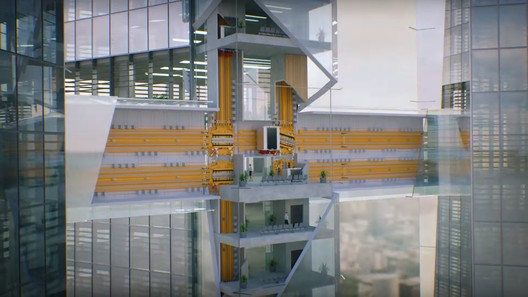