For most recent graduates, it quickly becomes evident that what you learn in architecture school is not necessarily enough to become a confident architect. Some things can’t be taught in classrooms at all; instead, they're acquired through years of work on site and solving construction problems first-hand. Among the many things you learn on site are the terminologies used by construction workers that can sound like absolute nonsense to architects at first.

An architecture dictionary might seem like a superb idea, but in practice wouldn't be convenient on a construction site—unless you can memorize the useful entries out of the 25,000 terms in Cyril M Harris' Dictionary of Architecture and Construction. Alternatively, here’s a more manageable list of 45 construction terms and concepts every architect should know. 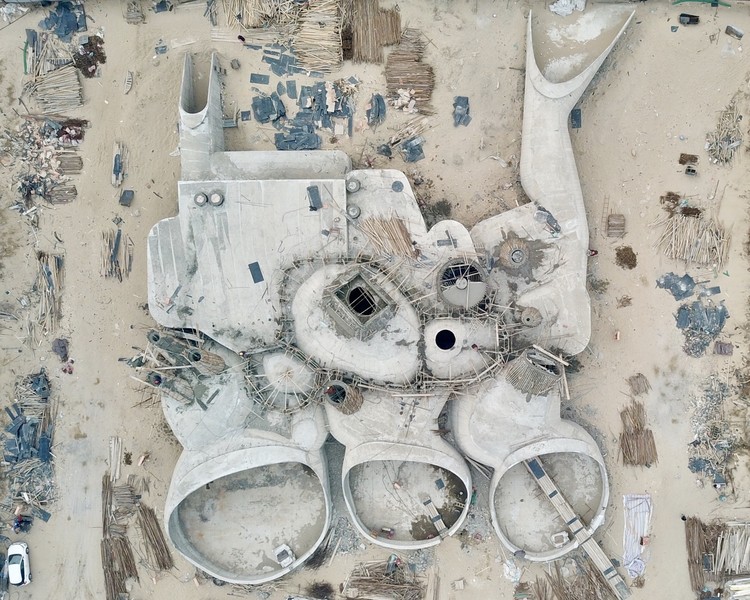 1. All-in Rate: In Construction, the term means the total expenses for an item, which include all the direct and indirect costs. The term is also used in the financial sector.

2. Architect of Record: This term signifies the name of the architecture firm, or architect, whose name has been listed on the issued construction permits. However, “architects of record” are not necessarily the people behind the design. There are times when high-profile architects who don't have an office near to their construction site hire “architects of record,” handing them the responsibility of working on-site or using their expertise in a specific field.

3. Batter (Walls): No, not cake batter, sadly. In architecture, batter means an inward inclination or slope of a wall or structure. Some architects choose this design to provide structural strength while others choose it for decorative purposes.

4. Blocking (Construction): Evidently, the term is derived from “blocks,” and means the use of short pieces or off-cuts of lumber in wooden-framed construction. Construction workers use the blocking technique for filling, spacing, joining, or reinforcing structures.

5. Box Crib: Think of this as the final steps of a game of Jenga, but without the anxiety of a collapse. Instead, box cribs are temporary elements used to reinforce and add additional support to heavy objects during construction.The material used to create box cribs are often wooden bars. Due to their practicality, box crib forms are also used in film productions for stabilizing platforms and dolly tracks.

6. Building Engineer: The MVPs of construction. They know it all, and are responsible for most of what goes on during construction. Building engineers differ from one country to another, but are mainly the experts of construction, technology, design, assessment, and maintenance, all at once.

7. Cant (Architecture): Or canted, is an oblique or angled line of a surface. Think of it as chamfering the edges of a building's plan. This design was heavily used in Baroque architecture to create a continuous feel to the composition.

8. Catastrophic Failure: If the term wasn’t obvious enough, “catastrophic failures” are abrupt, irrecoverable construction mishaps. The term has been extended to other domains, and is now used for chemical engineering, firearms, and cascading system failures.

9. Concrete Cover: The term is linked to reinforced concrete and is the least distance between the installed reinforcement and the outer surface of the concrete. The concrete cover has several vital purposes, including protecting the reinforced steel bars from corrosion, providing thermal insulation, and providing sufficient embedding for the steel bars to function as reinforcement.

10. Concrete Slab: One of the few construction elements that is used in the vast majority of all structures, a concrete slab is the thick (average of 10-40 cm) horizontal concrete platform which is created to construct the floor or ceiling. There are several slab designs (corrugated, ribbed, waffle, one-way) and each one corresponds to the design or endurance required.

11. Course (Architecture): Other than the class you take in architecture school, a course is the term used to describe a continuous row of masonry. Whether it’s stones, bricks, or concrete blocks, a course can have several orientations and types.

12. Cross Bracing: Cross bracing is a structural component used to improve the endurance of a structure. The X-shaped reinforcement can prevent a building from collapsing completely in case of earthquakes, or a wooden chair from falling apart.

13. Cut and Fill: While creating railways and canals, construction workers would create cut slopes (like a mini valley) to install the railways. The soil that’s been moved, the fills, would subsequently create adjacent embankments, minimizing the labor. The approach is now frequently used on construction sites of any size.

14. Damp Proofing: since dampness is among the most common construction problems, damp proofing is a procedure done to the structure to prevent potential moisture from being absorbed by walls and entering the interior. Depending on the nature of the structure and the damp problems it might face, a wide variety of materials can be applied onto the slab, under the final finishing, or even as a surface to act as damp proofing and prevent any spoilage.

15. Design-build: In most projects, construction is frequently delayed due to time conflicts between two (or more) teams involved. The idea behind design-build is that the same team who designs the project constructs it as well. It is a project delivery system in which the design and the construction are considered “single-point-responsibility,” reducing costs and delivering the project on time.

17. Encasement: On a construction site, encasement might refer to one of two things: in some situations, sewers and other underground pipes may need to be enclosed in a concrete encasement for structural reasons; or, the term might be applied to the process of encasing hazardous materials already installed in a structure such as asbestos.

18. Falsework: Mostly used for large arch structures and bridges, falsework is a temporary structure constructed to support and hold the span during construction or repairs.

19. Formwork: Formwork is falsework’s best friend. It is the construction of a temporary structure into which concrete is poured for it to be settled and set in the desired form.

20. Joint (building): Joints are inserted between two distinct materials in a structure which do not have any physical connection to one another but are either aligned next to each other or overlap.

21. Joist: Joists are crucial components of a wide-span structure, as they help transfer the load from the beams to the vertical columns and studs. These horizontal elements are connected perpendicularly to the beams (horizontally) and joined (vertically) to the columns.

22. Lean Construction: A newly developed delivery system in which a study is conducted to minimize the waste of material, time, and effort, resulting in an efficient project.

23. Lift Slab Construction: Also known as the Youtz-Slick method, the lift slab method ensures time efficiency and safety. Basically, the concrete slabs are cast on ground level, and are then lifted through hydraulic jacks into the designated placement. This methods not only saves  time, but also does not require workers to be creating and working with formwork on high ground levels.

24. Lookout (architecture): Lookouts are wooden joists that extend beyond the exterior wall in a cantilever-like manner, to support the roof sheathing phase in construction.

25. Moling: This is the use of a 60-centimeter-long, 6-centimeter wide steel "mole," a pneumatically-driven device which is inserted into the ground to create holes for pipes, heating coils, and heat pump systems without using any trenches.

26. Monocrete Construction: The monocrete construction method is the sole use of precast concrete panels, bolted together, to create concrete structures.

27. Performance Gap: Similar to when you expect to have three design proposals delivered by the end of the week, but you end up with only one because you’re just too tired, performance gap is when the expected work progress does not meet with the result on site. This could be due to environmental, workmanship, or occupant reasons.

28. Precast Concrete: One of the most commonly used forms of concrete, precast concrete is concrete elements are created off-site to be transferred or lifted to the site later on. Designs could range from blocks to panels, and create solid but maneuverable elements.

29. Purlin: A purlin is any longitudinal element implemented on the roof structure horizontally for additional structural or material support.

31. Rafter: Rafters are a series of inclined wooden elements that form a roof, which attach to the edge of the wall plate and often overhang to form the eave.

32. Rim Joist: In flooring systems, rim joists are attached to the ends of the floor's main joists, providing lateral support to the ends of the decking system. However, they are not the end joists, which are usually the first and last row, parallel to the other joists.

33. Rubblization: In order to save time and extra cost, unwanted existing concrete is broken down to pieces of rubbles, and left in its place to become the base layer for new surfaces, instead of transferring the material to another site.

34. Shiplap: You’ve probably seen shiplaps everywhere, but may have referred to them as wood panels. Shiplaps are a type of inexpensive wooden board or panels fixed onto the sides of barns, sheds, and homes.

35. Shoring: Temporarily installed on site, shoring is the method in which metal or timber props are assembled to support the structure during construction. Shores can be installed vertically, horizontally, or diagonally, depending on the support needed.

36. Soil Stockpile: The grown-up version of the sand pyramids we used to do as kids, soil stockpiles are created when bulldozers excavate the soil on site and stack them in piles.The piles never go to waste because they are used later on for level grading (see "Cut and fill").

37. Wall Stud: Wall studs are crucial members of wooden or steel wall frames, as they are the vertical elements that help support and transfer loads of bearing and nonbearing walls.

38. Superstructure: In general terms, superstructure simply means a structure built on top of another structure. Typically, this term is used to describe any part of a building that is above ground, with the parts of the building below ground conversely referred to as the substructure.

40. Tie (Cavity Wall): There are times when two elements of a building can not be merged together, and this is when ties come to the rescue. Ties in cavity walls are typically made of metal or plastic wires, and are placed in between the two materials, “tying” them together to create a homogenous body.

41. Topping Out: A ceremonial practice that traces back to ancient Scandinavia, topping out originally referred to when the builder installs a wooden beam on top of the structure to indicate its completion. These days, it is simply the moment when the uppermost structural element is installed and is often heralded as a major construction milestone.

42. Trombe Wall: Developed by French engineer Felix Trombe and architect Jacques Michel in the 1960s, a trombe wall is a solar building element that is designed for cold countries. Similar to the greenhouse principle, it is when a glass external layer is built outside walls with openings, absorbing the heat during sunlit hours of winter. The heat is then slowly released overnight to provide warmth through the openings.

43. Underpinning: Underpinning is the act of strengthening an existing structural foundation. If the project is being done on a previously built structure, the foundation might not be strong enough or new enough to carry the new building. Underpinning can be mass concrete, beams and base pinning, or mini-piled pinning, depending on the suitable solution to each structure.

44. Virtual Design & Construction: or VDC, includes all the multi-disciplinary models of a project. The list includes, but is not limited to, engineering modeling (product, process), analysis methods, model-based designs, scheduling, costs, and visualizations.

45. Voided Biaxial Slab: To be able to reduce the cost and weight of large-spanned reinforced concrete slabs, Joseph-Louis Lambot decided to create voids inside the concrete blocks, reducing the amount of concrete used but maintaining the overall endurance and external appearance of the slabs. These slabs are called voided biaxial slabs and are heavily used in construction nowadays.