Text description provided by the architects. Hutongs of the old Beijing are deemed as an authentic urban zone. Located within the second ring, this flat and intensive maze of alleyways and courtyards is surrounded by 20-metre-wide elevated expressways, ever-expanding skyscrapers and modern blocks. MINOR lab is situated in north Dongcheng District, close to the bustling Beiluogu Xiang. Quadrangle courtyards (Siheyuan), tenement yards(Zayuan), old residences of 4 to 6 storeys and scattered stores constitute the entire neighborhood. The layout of streets in Beijing are normally upright and square, whereas the width of alleyways reduces to 3 to 5 metres or an even narrower scale. The zigzag of Hutong lanes appears naturally due to human scale and their interactions, as the measurement and vein of the city.

In the morning and on the way to the studio, once turning into the Hutong from the main street, we would be welcome by a quotidian yet lively scene: neighbors with baskets shopping from peddlers and a slow traffic moving through a busy lane. The scent in the air smells familiar too: home cooking in the kitchen, breakfast stalls, public restrooms and seasonal humidity… As for the sound, it is equally vivid: neighbors’ chatting, peddlers’selling stuffs, passengers’ arguing…Different dialects, rustling leaves, singling birds and insects compose an intriguing symphony.

The courtyard that has been transformed to MINOR lab is a 13.5 by 9.5 metres rectangular site. When the wooden door is pushed open, a square space enclosed by grey brick walls presents itself. Two grand ginkgo trees stand in the yard – a unique space is created underneath the trees and on the rooftop, tranquil yet still immersed in the beats of Hutong. We came across this courtyard in the summer of 2017; back then, the landlord was reconstructing the wooden structure, grey brick walls and grey roof tiles. After rounds of communication, we decided to rent, redesign and transform the whole yard so that we could take root and build our own world of making architecture.

Communicate via architecture
Historically speaking, Beijing as an imperial city, has been established on the core basis of imperialization. The axes, Forbidden City and even the red city walls represented the absolute existence of imperial authority. Within such a complex institution of power and functionalities, Hutongs took shape gradually and became venues for the mass. Quadrangle courtyards on both sides of Hutongs were neighbors to each other. Behind the walls, every courtyard stood for a particular family space; and when they were aligned together by walls, all of them started to coexist and co-live on top of Beijing’s unique disposition.

In the course of modernization, the collapse and reconstruction of order has triggered massive changes to Hutongs and quadrangle courtyards in Beijing. As a result, after the upheaval, demographics, population density and the social structure have made it challenging to define quadrangle courtyards. The outline of Hutongs has been retained, however, the scenic substances behind the walls of Hutong courtyards have been fragmented in constant tearing down and reconstruction.

What has not changed for Hutongs, whether it is within or outside the walls, is that the community is still living their lives and sticking to their lifestyle in a timeless manner. Yet for us, we leverage the form of an architectural studio to open up a courtyard, wipe away the boundaries, and create a space for communication in Hutongs.

Flowing life under the roof
Walls on either side of the Hutong prevent direct sunlight from getting inside, which can be seen as a boundary between public and private venues. Within the walls remains an inward and enclosed space, however, the yard resembles a vast container, letting in sky, wind, sunlight, air and sound. The crowns of the two grand ginkgo trees are the flowing roof in the open air, overlapping layers of grey tiles. The exterior space under the trees connects to the interior one underneath the four roofs, floating and exchanging in a continuous way.

The main room in the north of the courtyard is the office space, the biggest indoor space. What connects itself and the yard is a transparent strip of space, instead of a mere façade. This virtual space is made of a metal thin wall, transparent glass and thick acrylic boards. From the entrance of the courtyard, a showcase window, a sliding door and a semi-outdoor and transparent exhibition space appear in proper order. The façade demonstrates reflections and diffused reflections of several processed metal materials, as well as different degrees of transparency relatively by acrylic boards and glass. Not only the façade transmits enough daylight, but also the strip space functions as a carrier of light. It mirrors indoor and outdoor views, blurs the boundary between the two spaces – daylight and views extend horizontally and working indoors feels like sitting under the trees.

The semi-outdoor exhibition space is separated from the yard with 13 25-millimetre-thick acrylic boards, placed in an inclined yet parallel manner. Within the 700-millimetre-wide space, one may feel the breeze, the light and shadow, the crystal presence and subtle reflection of the boards. The space is clear and transparent; actually, it is an exhibit itself. Apart from displaying models, it also holds exhibitions from time to time.

The other side of the courtyard houses a guest room (East), a bathroom (Southeast), a kitchen (Southwest), a café/mini-library (West). In the limited courtyard space, we have modestly imbedded a light and translucent interface made of steel frame, glass and polycarbonate panel. It combines the functional spaces and makes the aisle an extension to the courtyard space, which permeates the limited indoor space through the translucent interface or glass sliding door. The polycarbonate panel we have used guarantees proper privacy and thermal insulation, and softens the natural light indoor. It also varies the indoor scene with the changing sunlight and shade.

In terms of usage, it is much more than just a studio for daily work. By hosting weekend public events and exhibition and inviting artist over, we are sharing the courtyard space with the city. During this process, we learn to keep exclusive memories of the courtyard.

The lab of life & an organic city of people, objects and nature
We have chosen some common materials and leveraged simple craftsmanship in Hutongs. In this way, we have tried to harmonize new things and the initial scene and to create some new meanings. The birth of architecture or the evolution of a city is backed by a well-defined infrastructure. Rather than just a workplace, this courtyard serves as a laboratory for us. We treat every object, tool, plant and little animal with curiosity while working, exchanging, cooking, resting and walking around. By doing this, we are discovering how to place and interact with them properly. We are gradually learning how to create our own approach under the roof, and interpret it in our works and even conversations. These nuanced practices and observations are part of the architecture, and also clues depicting the memory of a city. 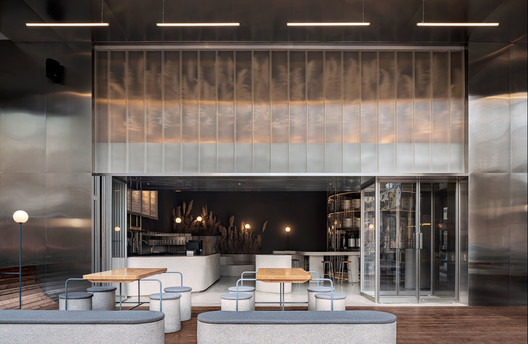