Foster + Partners will detail its vision of life on Mars and the Moon at the UK’s Goodwood Festival of Speed 2018. Forming part of the festival's Future Lab event, the vision will be presented through a range of models, robotics, and futuristic designs exploring the future of life in space.

The firm's showcase will include a virtual reality experience, allowing visitors to explore the inside of a proposed state-of-the-art habitation pod.

The FutureLab, returning for its second year, is an event taking place at the Goodwood Festival of Speed which hosts “some of the most innovative and forward-thinking visions of future technology.” This year’s event will feature a robotic bartender serving drinks to its (human) visitors, shaking Martinis, slicing lemons, and mixing an almost limitless number of cocktails.

We’re delighted that our design concepts for habitats on Mars and the Moon are taking center stage at the FOS Future Lab. It’s a fantastic opportunity for us to show how technology can enable us to create extra-terrestrial settlements. We hope visitors to the Goodwood Festival of Speed will come away from the display excited and enthused about the possibilities of the future and that it will inspire the next generation to reach for the stars.
-David Summerfield, Head of Studio, Foster + Partners

Foster + Partners will explore the development of habitats on Mars and the Moon using a wide range of technologies, including 3D-printing, robotics, and Regolith Additive Construction, which uses loose soils and rocks on the lunar surface. Foster + Partners will also showcase a robotic arm, sadly programmed to create plastic objects, rather than cocktails.

The vision on display at Goodwood will not be the first engagement between Foster + Partners and the Final Frontier, with the firm awarded top prize in NASA’s 3D-Printed Mars Habitat Challenge in 2017.

The Future Lab will be open to the public throughout the Goodwood Festival of Speed from the 12th to 15th July 2018.

NASA has announced the completion of the initial printing stage of NASA's 3D-Printed Habitat Challenge, awarding Foster + Partners | Branch Technology and the University of Alaska, Fairbanks as the two top-scoring teams from this round. 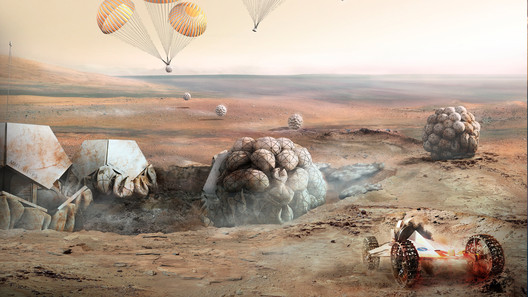