Henning Larsen has released images of their proposed urban development for the historic Imperial Shipyard at Gdansk, Poland. The 4.3million-square foot (400,000-square-meter) development seeks to transform the shipyard, built in 1844, into a “powerful financial and social engine building a thriving, mixed-use, inner-city neighborhood by the waterfront that is alive around the clock.”

The old industrial site has played a central role in the economic development of both Gdansk and Poland, serving as a key shipbuilding hub on the Baltic Coast. Through creating spines of public life centered on pedestrian/bicycle-friendly streets, Henning Larsen seeks to maintain the shipyard’s strong presence through waterfront living, work, and recreation. 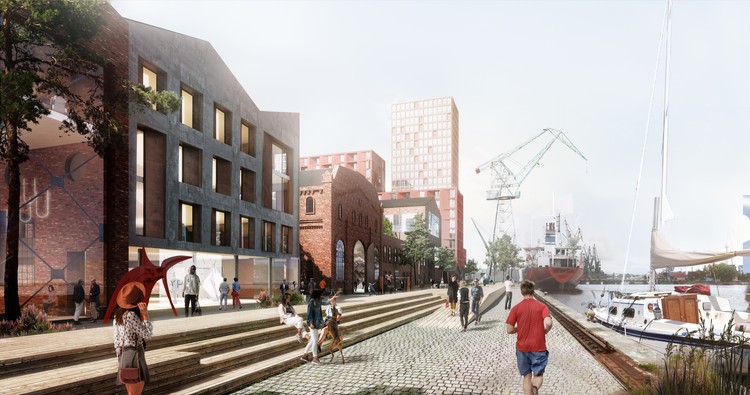 It was important for us to pay tribute the unique history of The Imperial Shipyard still visible in the remaining historical buildings. Also having been at the heart of the workers’ movement, many families still feel a very personal connection to the site. Opening up the waterfront to be publicly accessed as well as creating a pedestrian and bicycle friendly connection to the city center will help to give the Imperial Shipyard back to its people.
-Jacob Kurek, Partner, Henning Larsen

Henning Larsen’s proposal is anchored by three urban spaces: The Plaza, The Park, and The Dock. The Plaza will host market days, ice skating, and concerts, situated close to where the signing the 1980 Gdansk Agreement brought fundamental change to the Communist political structure.

The Park offers views across the river and city and a “lush urban forest” for visitors and residents alike. The Dock forms the heart of the new development, connecting the Imperial Shipyard to the city center through broad sidewalks, a large wooden seating element which doubles as a flood barrier, and an urban beach and marina.

The proposal will see the creation of 3500 residential units, taking the form of several typologies, including a larger typology derived from the classic residential Gdansk block. The residential aspect will also feature green community courtyards and rooftops, acting as social spaces and safe play areas for children.

For the scheme’s development, Henning Larsen has worked in collaboration with A2P2 Architecture and Planning, BBGK Architekci, and Belgian developers Revive and Alides.

The news follows other recent urban development proposals by Henning Larsen, including a 16-acre waterside project in Belfast, Northern Ireland, and the 11-acre Key West development in Brussels.