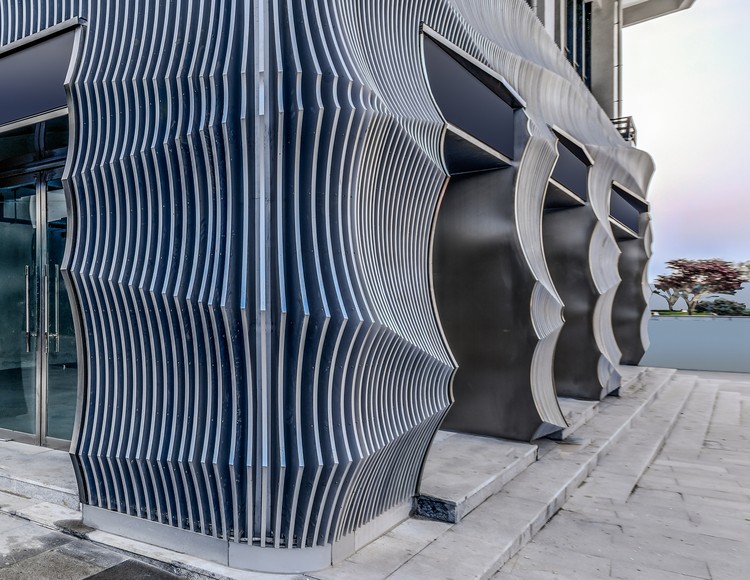 Text description provided by the architects. In this project, we were asked by our client to reconstruct the facade of a main commercial building within one of Qingdao's fashion industrial parks. The project is situated only a road away from the sea and it is in fact overlooking the shoreline. The new facade looks to establish a more intimate connection between the designer hotel on the other side of the park and the adjacent office building, which hosts many fashion events throughout the years and provides various fashion journalism functions to the local fashion community. We hope to lead and to connect the seemingly unrelated elements of fashion, ocean, and commerce together through artistic means.

Urban Scale
Despite the scope of the project, we attempt toview our design problem from a wider perspective and to approach the design at a city scale. This narrow and long (150-meter-long, one-storey-high) facade would essentially function like a linkage to connect city nodes and venues together during fashion events. As such, the demand to enhance the walking experience within the park is arguably moresignificant than the needs to further improve the park's existing commercial functions. The original facade was anordinarily painted wall. We believe that not only should we provide a more positive visual appeal for the local businesses, but we also ought to provide a higher level of artistic experience to further compliment the fashion events.

Architectonic
Tides, wind directions and wind force convert the sea into different manifestations. Additionally, the changes of light and climate, and the shifting of waves strongly influence the mood and emotion of the park visitors. As people are often enchanted bythe endless changes in natural phenomenon, we wondered why can’t we extract architecture syntax from such sentiment, thereby transforming the ordinary facade of commerce into a solidified sculpture.

Parameterize
We intended to solidify the dynamic sea surface parametrically so that it could be properly panelized and fabricated. The crushing wave surface is analyzed and classified into different geometrical patterns and then brought into the facade segments, whose fractal nature is expressed by self-similar arcs. In a large number of faceted tests, we found the right size and thickness of the curved surface to balance the cost of producing the entire wall, and the visual experience of bump shape. The inside and outside corners of the original building were completely incorporated into the representation of the facets, while the corners were carefully subdivided so that the curves could seamlessly flow over the facade to form a unified system.

Fashion as Second Skin
From a modern and analytical point of view, we realized the intersection of the sea and the city as environmental conditions on the architectural scale, and redefined the possible combinations of fashion and architecture: we created a second skin, which is not merely a superficial shell, but one with a body and a depth. The permeability of the louver allows the original building walls and its basic functions to be seen. The relationship between the dynamic mass and the structure further implies the dependency of fashion fabric to human body, and simultaneously responds to the design intention of attempting to satisfy the city’s demand for a contemporary fashion venue. 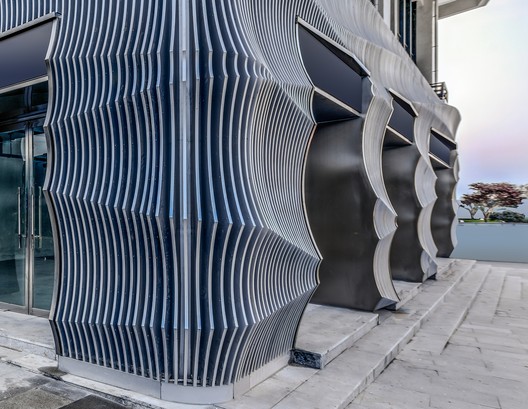