As an industry populated by creators, the business of design is continually reconsidered and reshaped by processes of reinvention and experimentation. Rarely content with yesterday’s innovations in anything from modeling software to building materials, architects naturally look for strategic ways to gain maximum advantage in both building and business. Taking just such a creative approach to the challenge of improving athletic venues within the stringent time frame of a team’s offseason, the dominant Kansas City-based sports architecture firm Populous recently launched a standalone service that employs the efficiency advantages of a design-build firm to simplify and expand the process of implementing stadium upgrades without any disruption to the fan experience. 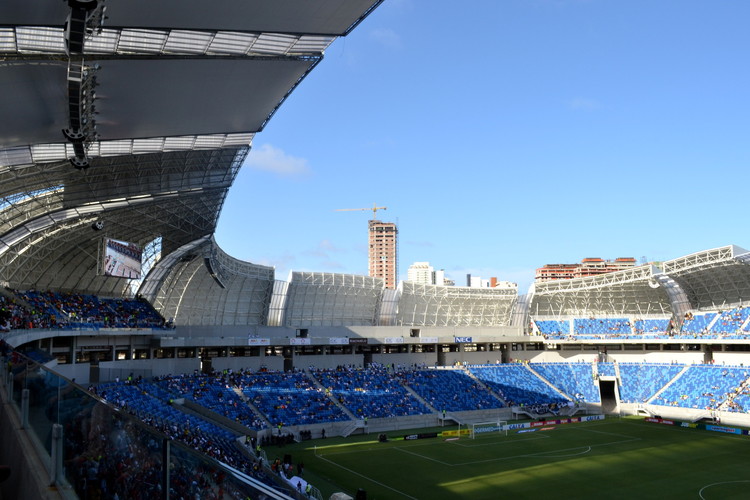 Employing over 200 architects worldwide and specializing in projects as massive as NFL and Olympic stadiums, Populous is one of the largest players to enter the expanding design-build game. While their main business of creating grand-scale megastructures might involve too many complications to feasibly complete outside of the established design-bid-build model, creating a specialized design-build group within their practice opens opportunities for new projects of smaller scale but huge ambition; after constructing a new playground area within Oriole Park at Camden Yards this winter, Populous Design+Build is now building America’s first esports stadium within a previously underused portion of the Arlington Convention Center in Texas.

“After 35 years in the sports business, we uniquely understand our clients’ challenges,” said Earl Santee, managing director of Populous Americas. Since their creation in 1983 as HOK Sport Venue Event, the firm has designed a significant number of the professional and international sporting arenas currently in use, including Olympic stadiums for the Sochi 2014 and London 2012, high-profile reconstructions of Yankee Stadium and Wembley Stadium, and a new retractable roof for Wimbledon’s Centre Court at the All England Club.

Meanwhile, the design-build concept has been trending upward and gaining widespread acceptance in the construction world. Design-build groups differ from conventional architecture or construction firms by combining the two functions, signing a single contract to perform all design and construction work while functioning as a single point of contact for a project’s owner.

In a series of editorials on the topic, Steve Lazar of Lazar Design/Build explains that having a single entity handle both design and construction makes a big difference in simplifying communication on a project. “All the finger pointing comes to a screeching halt when there are only two parties in the relationship,” he says. “The blame game of ‘it can’t be built that way’ or ‘why does it cost so much,’ is no longer part of marriage when the process is streamlined between the client and the master builder.”

Thanks to this streamlined communication, elimination of a bid process and other efficiency benefits enabled by the simplified structure, the Design-Build Institute of America says that the process can shorten a project’s delivery time by 33.5% and lower unit costs by 6.1% compared to a traditional design-bid-build workflow. By operating as the sole point of contact for their projects, Populous Design + Build say that their approach creates more predictable outcomes, significantly reduces change orders and reduces overall project production time. “We’ve seen there can be quite a few pitfalls in getting off-season renovations done, whether it is uncertainty in pricing, costly change orders or untested ideas,” said Santee.

Particularly when operating within the cyclical athletic calendar, there are clear benefits in a single firm being able to take full control of the construction process. Working with the owners of a team, Populous is able to execute the ideation, design, valuation, procurement and FF&E steps of a project while the venue is in active use during the season, making sure that construction is ready to begin as soon as the team’s campaign ends and their stadium begins its offseason period of disuse. The increased speed of design-build projects allows more ambitious schemes to be realized during the finite time period before the next year’s games resume, enabling a team to bolster their product without any negative impact on fan experiences during the construction period. Especially in an openly commercial context like professional sports, this makes stadium upgrades a more attractive investment than ever before. A unified design-build approach also gives the client tighter control over the finished product, which is helpful when a product’s final result must fit into a larger established and carefully-deployed brand and gameday experience.

The efficiency and speed of design-build construction does come at a price, though, as removing the opportunity for contractors to bid on a project has the potential to increase costs by eliminating competition and decrease transparency throughout the project. While these issues could lead to disaster at the scale of a full stadium, the ability to complete otherwise-impossible smaller projects within such an inflexible time window is arguably worth the potential price inflation. The smaller projects, which might involve adding new concessions areas, interactive amusements or private clubs, are also much less subject to widespread scrutiny and public input—thus decreasing the importance of open and transparent dialogue during construction.

Given the practicalities of sports architecture, design-build solutions are perfect for enabling the Populous team to carry out surgical small-scale interventions that incrementally improve an existing venue without disrupting its use. Approached as a tool, strategic use of design-build construction can also have similar effects on any other buildings with predictable periods of disuse, like schools and academic campuses, vacation homes, or seasonal businesses like ski resorts. Speeding up construction with design-build techniques could allow these entities to improve their facilities in unforeseen ways without any disruption to their function.

Being a firm with a specialty within the architecture world, Populous’ new Design + Build wing gives them a specific new capability that will allow them to continue improving their venues after initial construction and maintain relationships with their clients over time. On a more universal level, if other large global firms were to embrace design-build methods in this manner, it could enable a wide variety of schemes previously considered untenable. While design-build may never fully replace the conventional bidding system, Populous Design + Build will serve as an interesting case study on the potentially expanded role that designer/builders could have in the architecture of the future. 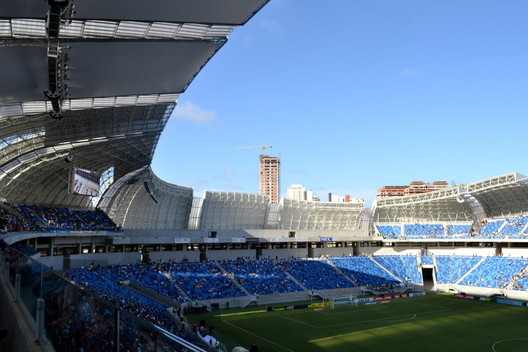