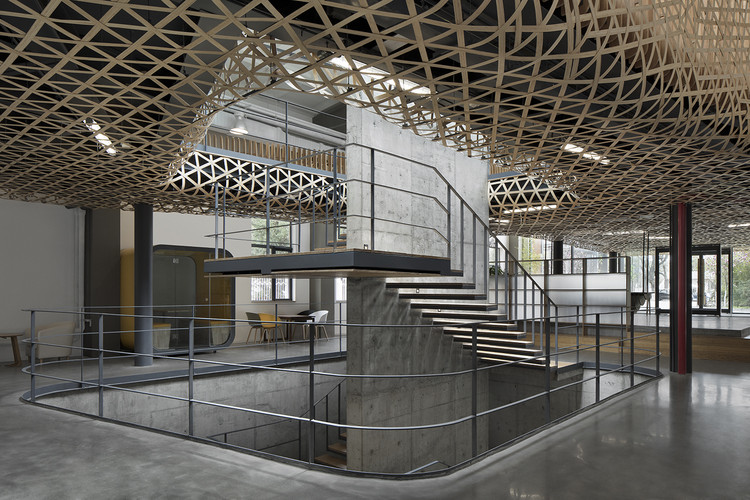 Text description provided by the architects. From an individual perspective of freedom, to a communitarian and wider perspective of freedom, Mafengwo dynamically brings new ideas to the industry, striving to deliver absolute freedom of travel, while SYN Architecture communicates the brand’s philosophy by delivering a uniquely crafted workspace – Phase II of Mafengwo’s Global Headquarters.

Design Concept
Height limit presented a big challenge for the transformation of space in Phase II. The architect’s first consideration was to adjust spatial scale. Without altering the foundations of the building, the space below the construction was extended to a depth of 4m, mainly to solve storage needs. The space above the ground was in turn extended through the use of a mezzanine.

To ease the oppressiveness caused by a space enclosed by low ceilings, the designer found inspiration in “the clouds” to build an irregular mezzanine running from north to south – extending to the outside of the structure – and from east to west. Load-bearing columns allowed a precise control of floor thickness, further saving space. Support columns with a span from 8 to 10 meters also reduced in half the normal height of steel beams, maximizing the perception of space. These measures moderately increased the available area and made the space more comfortable altogether.

Regarding transit and social exchange, two open staircases that connect three levels respectively were deployed on both the northern and southern sides of the project. A preformed steel structure clearly denotes every level, creates a path between them and provides efficient communication. On the topic of illumination and lighting, two prefabricated panels on both sides of the roof were removed to add 60m of partially remote-controlled skylights that bring nature into the building.

Materials and Art Installations
To preserve the cultural foundations of the building, the designer retained steel frames, concrete floors, and iron elements on doors, granting the space with a strong industrial atmosphere. For the interior, however, more humanistic and natural motifs were selected based on “bamboo” materials, adjusting the temperature of the space, and matching the vividness and lightness brought in by the concept of “clouds”, in a well-balanced integration between equipment and functional design.

On the first floor, the designer profusely incorporated a traditional bamboo weaving technique to the structures available. Here, bamboo mesh covers pipes, air conditioners, lamps and many other objects. The designer calculated the scale of the gaps for every mesh, forming them graciously around equipment and installations, granting objects with the plump texture of “clouds”, and visually reducing spatial pressure.

The material extends upwards through the stairs. On the second floor, irregular bamboo boards are orderly arranged against the guardrail. On the interior side, benches with boards made of pressed-bamboo are provided on predesigned slots that fit them perfectly, and grant the pathway a curved effect. This area not only provides protection and support to the user, but also increases spatial richness.

Spatial and Functional Layout
Mafengwo’s Global Headquarters Phase II grants access from the north and the south. The north area is designed for internal use, has a garage, and employees can directly access their offices on the first and second floors. The main entrance is on the south side, a focal point that connects public spaces within the project. Due to the limitations on space, the internal areas of the building, especially on the first and second floors where a lot of people work together, avoid the use of wall partitions and are organized according to functional use.

The reception is located in the lobby of the first floor by the south entrance. A front desk covered in bamboo clouds “hangs” from steel pipes coming down from the ceiling, in a perfect match with the overall decoration. Arrays of shelves naturally separate inner and outer levels of space, with walls as their only boundary, they form an open reception and recreational area. Further inside, inter-leveled passages and meeting rooms form an internal public area, providing a buffer between the office area and the exterior.

The designer used customized curved glass separations to define conference rooms, creating multiple isle-like shared spaces, distributed in both levels and sides of the “cloud”. The choice of transparent enclosures defines the functional area, opens the line of sight and eliminates the depressive atmosphere of limited space. The concept further expresses unlimited communication, transparency and freedom.

Mafengwo’s corporate culture emphasizes respect for employees. During the design process, this principle was applied to the first large-scale event organized by the brand “Introduction to the Global Wall of Fame”, and five representative walls of fame were placed into the office to be kept as a memento. 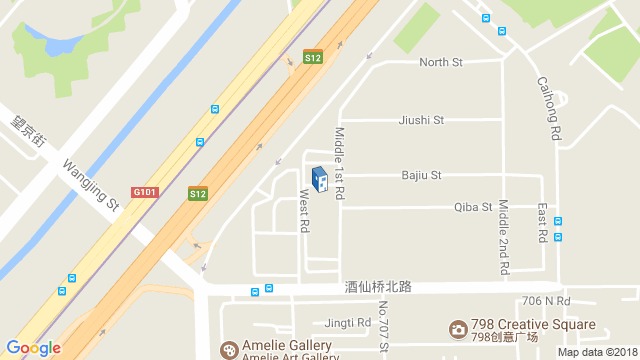 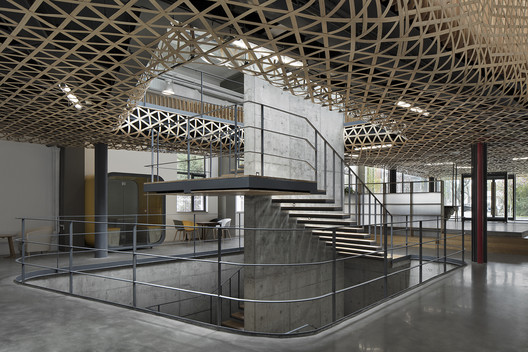