There are few things in this world better than books on architecture, especially when they're available to download for free! Following on from our ever-popular post from 2014, we've gathered up ten more books that cover a broad range of interesting topics—including advice to architecture students from Herman Hertzberger, a look at what sparks the formation and growth of a city, and even a book that offers an in-depth architectural analysis of Alfred Hitchcock's films. Check out the list below!

1. The Origins of Modernism in Russian Architecture

Russia has seen an impressive timeline of both artistic movements and shifts in political ideologies that have greatly influenced the way that architecture was designed and built. If you've ever wondered why Russian architecture looks so distinct, this book offers an answer to that question.

2. Dwelling in the Text: Houses in American Fiction

This book offers an analysis of how different American authors have represented and understood the house as a structural element, a metaphor, and a metaphysical object.

3. The Urban Wilderness: A History of the American City

In this text, Warner describes the processes of urban absorption and the creation of institutions that helped form America's first cities.

4. American Urban Architecture: Catalysts in the Design of Cities

By Wayne Attoe and Donn Logan

What exactly makes a city "American" and how can a single building spark the growth of an entire town? Find out in this book that explores different strategies for urban design.

5. Lessons for Students in Architecture

This book reflects on lectures given by Hertzberger at Delft Technical University in 1973 and offers insight into how students can correctly explain their work and understand the precedents and styles which influence their designs.

6. The Domestic and the Foreign in Architecture

The Domestic and the Foreign in Architecture is a compilation of a series of essays, photo essays, and discussions with a variety of architectural experts. The overarching theme explores how architecture has been expressed both in its past and present state.

7. Cognitive Architecture. From Biopolitics to Noopolitics. Architecture & Mind in the Age of Communication and Information

We all know architecture has an effect on the body of an individual or a group of people. But have you ever wondered how it can alter someone's mind or mental state? This compilation of texts may provide you with an answer.

8. The Wrong House: The Architecture of Alfred Hitchcock

Alfred Hitchcock directed some of the most famous movies in the world and influenced the way that cinema utilizes certain architectural elements today. From the glass towers in North by Northwest, to the curved bridge in Vertigo, this book explains how architecture plays an important role in films.

9. On Being an Architect

Everyone has a different opinion on what architects should have influence over. Society? Politics? Art? Religion? This book from 1969 explains why architecture encompasses all of these things, and how we can work towards developing a better future.

This book describes the roots of modern architecture, but also explains how it is vastly different from any other architectural moment in history. 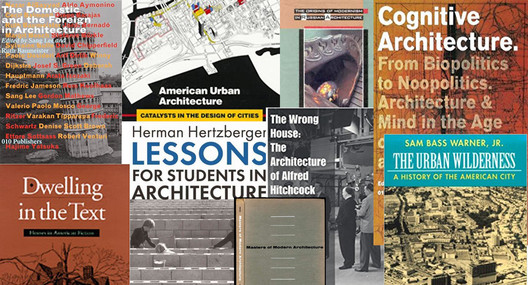