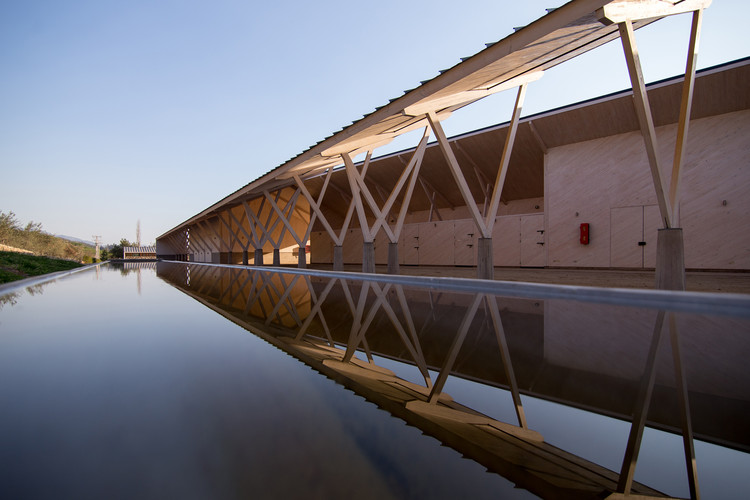 Text description provided by the architects. We were commisioned a master plan and the desing of all the infrastructure for a
field at the foot of the mountain range in the town of Huelquen, Chile. Whosehillsides were planted with vineyards, and its flat part, of grass for fodder. The project sought to gather all the farm equipment and service area into a covered building in order to create an operational center for this agricultural business.

Situated next to the access path, -right on the way to the upper fields, further up the mountain-, the project appears with all its power in front of the visitor, under a single narrow and extended roof. It gathers three fundamental units: the first includes office spaces and a dining room for workers; the second designed for machinery, tools and products; and a third one for horses. Two voids break through the building interrupting its almost 100 meter length, shaping two hallways that act as mediators between these three units, letting the view, the light and the wind go through the building from one side to the other.

The large gable roof opens at the ends, leaving both sides separated. This gesture is accentuated when reaching the stables, where the west slope of the roof turns in 15 degrees allowing the sunlight to penetrate into the horse stable during the day. Meanwhile the other slope remains unchanged, parallel to the path, shading the horses during the stable daily cleaning duties. The project pays special attention to details so to solve issues regarding horse care: the trough, the ties, the horse stall shutters which are closed every night, the saddle room, the saddle supports, and the horse feeders among others.

Traditional woodwork joinery details developed with today’s automated technology were the basis to the structure design. This reduced the amount of metal joints, and leaving them almost completely out of sight.

The prefabricated wooden structure required an extremely precise assembly work to correctly fit over the exposed concrete bases previously built. The concrete casting for the bases was made with wooden boards in order to provide the right texture. After the prefab wooden structure was in place, carpenters finalized the job by executing manual work using standard selected pine. The construction was, therefore, the result of a coordinated workflow between technology and craftsmanship. Playgood's consultancy was fundamental in developing the woodwork for this work. 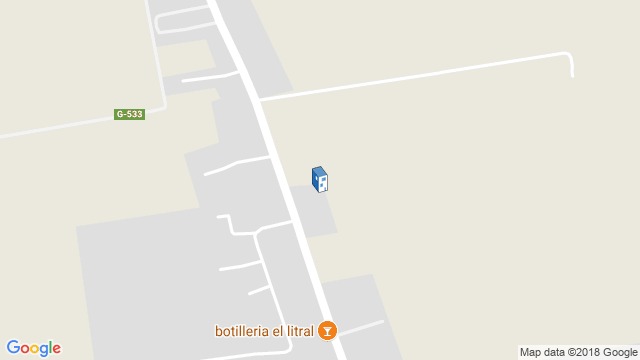 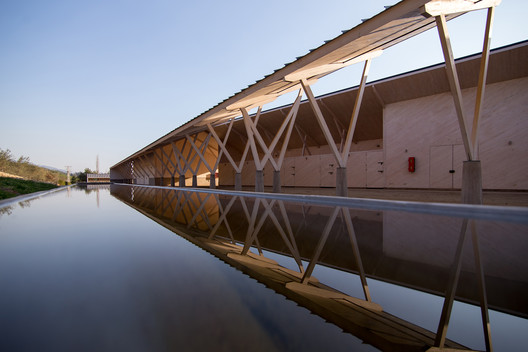