Fologram has recently built the world’s first pavilion-scale steel structure using the HoloLens, displaying the possibilities of integrating standard CAD workflow with augmented reality. By displaying the generative design model through holographic instructions rather than traditional 2D drawings, it explores the potential of revolutionizing the bridge between design and construction. 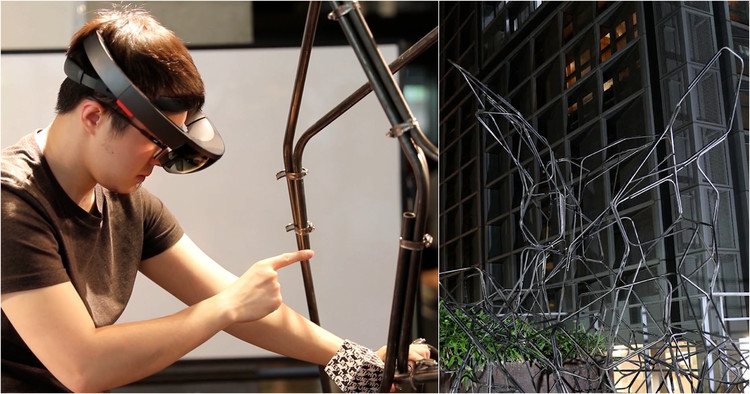 The released video displays non-expert students using the HoloLens to construct the Woven Steel pavilion, integrating the views from their screen with physical construction. Completed entirely by eye through augmented reality technology, it shows how the HoloLens can fulfill one of its originally predicted potentials of drastically simplifying construction and maintenance work. In this case, the creation of the Woven Steel pavilion took under three days, displaying the possibilities of constructing complex geometries through simplified and accessible methods. It radically expands the possibilities of what can be physically built, introducing a significant development in the future of architecture.

Fologram describes how the use of mixed reality technology in design can reduce the reliance on 2D documentation when interacting with clients, as well as more accurate tendering through on-site visualization of projects throughout the design process. In the words of the founders, it “has the potential to revolutionize what we can design and build and radically shift design viability as projects that were once difficult, complex and expensive become straightforward, low-risk and cheap.”