Save
A Man, a Suit, and a Window: The Strange World of the Luxury Skyscraper Promotional Video
Share
Or
Copy

The poster child for the male-centric skyscraper promotional video is an advertisement from Redrow, a luxury apartment group in London. Compared by architect Sam Jacob to American Psycho in a parody of the video, the narrated film follows a man as he rises through the ranks from a low-wage worker to a wealthy penthouse occupant. Towards the end of the video, we finally see his apartment; ominous music plays as tracking shots reveal a copy of New Graphic Design on his bookshelf and his girlfriend asleep in bed. In the final shot, our protagonist looks out over a nighttime skyline. Oh, how far he’s come.

425 Park Avenue, Foster + Partners’ 900-foot, soon-to-be-finished office building in Manhattan offers a Gotham-esque interpretation of New York City in its menacing promotional video. In just over two minutes, the video manages to squeeze in seven instances of male window-gaze (yes, we counted). Different figures, all clad in dark suits, stand at various floor-to-ceiling windows; sometimes they’re on the phone, other times they’re talking to male colleagues, but mostly they’re simply gazing at the other, less impressive buildings that surround their mighty perch. The most memorable (and heavy-handed) shot depicts a businessman from behind as he looks towards—and indeed, down upon—the Chippendale-inspired tip of Philip Johnson’s AT&T building. We can’t help but wonder if he has work he should be doing.

A Conference Room Fit For a King

A cinematic promotional video for One Vanderbilt—a project in the works from Kohn Pedersen Fox—presents a bleak, black-and-white vision of New York at present. It’s overcrowded, the subway is slow, and it’s (apparently) always raining. But as One Vanderbilt goes up just across from Grand Central Station, the sun comes out, the video dissolves into color, and it seems that all of New York’s woes have dissipated. The only problem, then, is that a building meant to alleviate overcrowding is occupied only by a few businessmen in massive offices.

Beginning with a quote from Austrian management theorist Peter Drucker—“the best way to predict the future is to create it”—this promotional video for Kohn Pedersen Fox’s renovation of 390 Madison Ave seems to suggest the future of office space. As a lowly, rendered employee drudges away in his uninspiring carpeted office, he notices glass panels flying off of the building’s facade. When he returns post-renovation, he’s rejuvenated—smiling and now wearing a suit in a modernized office. Now, this is a window fit for some good, old-fashioned window gazing! 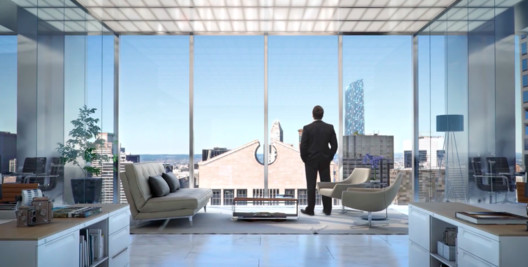