Mecanoo has released images of their proposed Taichung Green Corridor in Taiwan, set along a mile-long (1.7-kilometer) former railway line cutting through the city center. Once a valuable means of connection, the railway currently acts as a barrier due to its awkward position along a dyke, impeding circulation across the railway lines.

The Mecanoo scheme seeks to reuse the railway line to connect different parts of the city through a green corridor centered on biodiversity, cycling, and walking. Throughout the design process, Mecanoo addressed factors including urban regeneration, public participation, historic preservation, and green and water resources along the Green River waterfront. 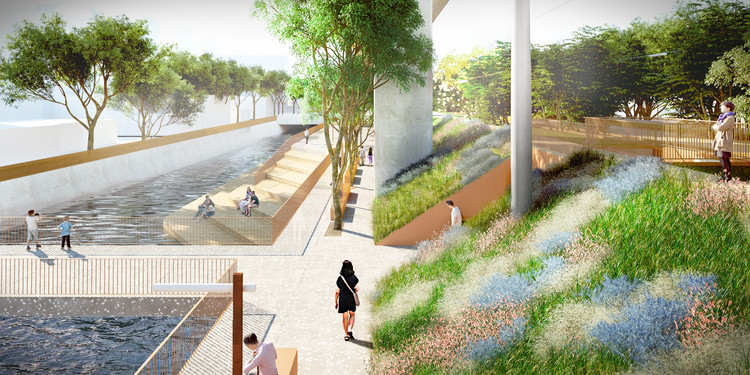 In an effort to maintain the area’s historical character, the scheme’s circulation system relies on the junction railway’s track pattern, while branching routes along the line offer a visual reference to the language of railway infrastructure.

In order to become a destination for users, the scheme will include public amenities such as a herb garden, street fitness, playground, and waterpark. The proposed program is therefore designed to intensify the area's use as a recreational node for the local community, while also functioning as a connection to Taichung center.

Mecanoo worked in collaboration with landscape firm S.D Atelier, and ARIA architect & planners. Having been designed in 2017, the scheme is due to be constructed during 2018 and 2019. News of the scheme's construction comes weeks after Mecanoo released details of a 234-unit social housing scheme for Taiwan.