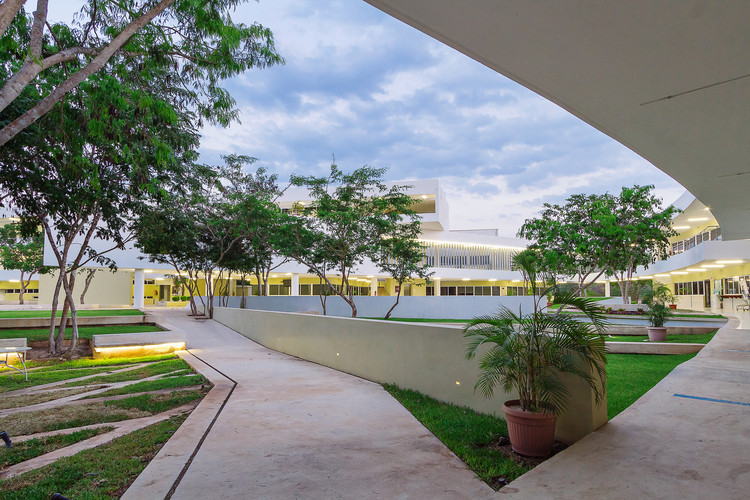 Text description provided by the architects. It is a vigorous complex of volumes with varied geometries that expresses the different university functions and lays down carefully in the jungle, embracing a large courtyard with multiple atmospheres. A building that talks with its neighbors, but subtly distinguishing itself from the environment. It constructs an urban fabric, locating its access in the node that forms the main avenue and the roundabout. Its curved shapes and heights respond to the immediate neighbor: the school of Economics. Its western wall is aligned with the Campus Library, and its slope finish is adopted by the classroom building.

The school is deployed with three geometries that respond to the different university functions. A first orthogonal body of three levels, for the classrooms; another triangular of two levels, for the managers and research cubicles; and the third one consists of two curved volumes: administration and services. This strategy facilitates the readability of functions.

The formal design exploits the tension generated by the contrast between the curved and straight shapes. The ensemble is unified with the flying plates that fold, form the porticos, rotate, integrate the triangular volume and after a transition, reappear in the classrooms building, forming corridors along the wall of the staircase.

Much of the original landscaping of the property remained intact, preserving around 300 trees. The courtyard of 1,300 square meters is the protagonist, establishing contact between nature and the user, by extending the activities to the outside, alternating transit spaces, with stays on the terraces roofed by the delicate tropical native fronds.

The classrooms rule the composition. They are in the highest volume of three levels, oriented north-south, to diminish the thermal gain. Metallic louvers on the south facade minimize solar impact. It favors the natural cross ventilation, by the strategic position of the windows, blocking the visuals from the corridors, but allowing the passage of air towards the students. Wind towers are used: passive mechanisms that increase air circulation, taking advantage of the fact that the greater wind flow on the roof sucks the warm air from the classrooms. The particular design of the classroom has an access vestibule and an acoustic solution by ceilings, generating a comfortable and versatile interior space.

The constructive systems used are rigid concrete frames every 4 meters, including the curved volumes that were sectioned in parallel, achieving minimal adjustments to integrate them into the general construction system. Double T-beams in the access, with an average cantilever of 20 meters. In addition, a structure of concrete beams resting on the cube of the staircase, diagonally arranged, with a hollow that reaches up to 8 meters, which hangs the wall of the west facade of the classrooms and appears in the main access.

A careful spatial sequence, structured with clear endings and turns, in which unexpected visuals are achieved with different ranges, privilege the human scale, marked by the predominantly horizontal lines, establishing unequivocal links of identification; manifesting in the joy of living the site. 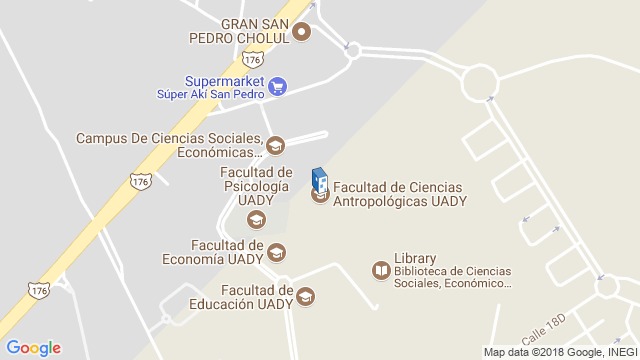 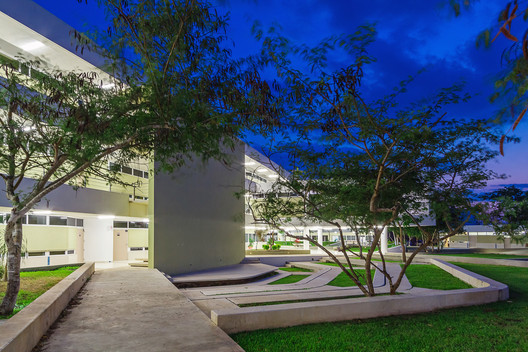 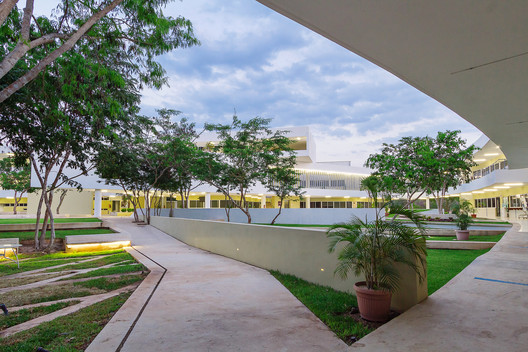