Thirteen projects have been announced as winners of Docomomo US’ 2018 Modernism in America Awards, honoring projects within the United States that highlight and advocate for the restoration of postwar architecture and landscapes.

Now in its fifth year, the Modernism in America Awards were founded to celebrate "the people and projects working to preserve, restore and rehabilitate our modern heritage sensitively and productively. The program seeks to advance those preservation efforts; to increase appreciation for the period and to raise awareness of the on-going threats against modern architecture and design."

Below, we have rounded up the successful schemes, and an organizer’s description of their significance. 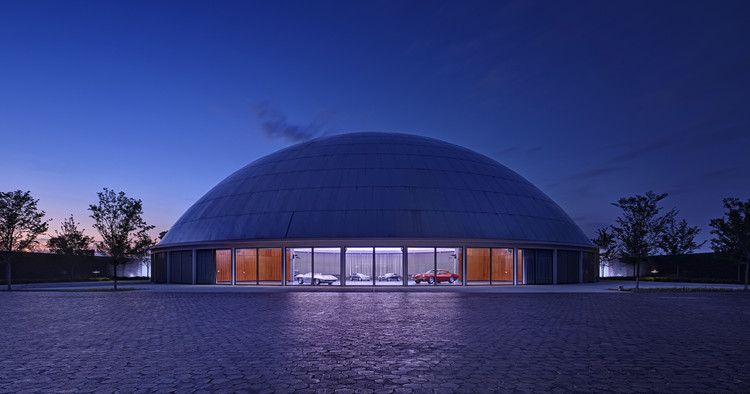 The Commercial Design Award of Excellence is given for the restoration of General Motor’s Design Dome and Auditorium located on their corporate campus in Warren, Michigan. Designed by the world-renowned architect Eero Saarinen and Harley Earl in 1956, both Saarinen and Earl worked closely with the styling team and placed special attention on the spaces concerned with designing, prototyping, and evaluating new automobiles.

The 180-foot diameter Dome has become an iconic piece of automotive design and one that organizations from around the world have prototyped for facilities of their own. General Motors initiated the renovation with the design team at SmithGroupJJR, which looked to enhance the Design Auditorium as an evaluation and presentation center for critiquing and displaying the next generation of automotive product design.

The overall design intent was not just to modernize the facility but to do so in a manner consistent with the original detailing while implementing sustainable solutions to lower energy and maintenance costs.

The Commercial Design Award of Excellence is awarded for the restoration of the Lenox Health Greenwich Village, formerly known as the Joseph Curran Building and the O’Toole Medical Services Building, in New York City. Designed by Albert C. Ledner in 1964, the building, which served as the National Maritime Union headquarters, was bold in its appropriate ship-like design, in its deference to circular forms (illustrating fairness and equality), and in its stark contrast with the more historic architecture that typifies Greenwich Village. In 1973, the building was purchased by St. Vincent Catholic Medical Centers and became the Edward & Theresa O’Toole Medical Services building.

After St. Vincent closed their doors, a herculean effort was made by preservation advocates to save the building, resulting in the commitment of the new owners, Northwell Health. The design team, led by Perkins Eastman, painstakingly restored and adapted the historically significant building within a landmarked district to capture the original design vision, while creating a leading-edge medical facility—the first of its kind in Manhattan.

The Civic/Institutional Design Award of Excellence is given for the restoration of the Hill College House. Located on the University of Pennsylvania’s campus, the building was designed by Eero Saarinen with landscapes by Dan Kiley in 1960. Saarinen grounded his design for the five-story, 195,000-square-foot brick residence in the idea of a self-sufficient village; it was the first purpose-built women’s dormitory at Penn.

No major renovation had been performed at Hill College House since it was built, and although the architecture continued to foster a strong sense of community, dated systems and finishes needed updating. Penn wanted to bring the residence up to 21st century standards while retaining its unique features, and the design team’s collaborative approach involved conservation, laboratory materials analyses, and archival research to understand Saarinen’s original details and appropriate contemporary replacements or complements. After undergoing a 15-month, LEED Gold certified comprehensive renovation, the landmark reopened to 500 student residents in August 2017.

The Residential Design Award of Excellence is given to the restoration of the George Kraigher House in Brownsville, Texas. Designed and built for Pan American pilot George Kraigher in 1937, the house is the only single-family home in Texas designed by Richard Neutra and the first International Style house built in the state.

Threatened by neglect, fire, vandalism, and water penetration, the Kraigher House was the focus of nearly two decades of preservation efforts. Beginning in 2005, a unique partnership of community activists, city officials and, the University of Texas, Brownsville/Texas Southmost College came together to secure and restore the house. Instead of a team of architects and consultants, the restoration team was led by University professor and rehabilitation projects manager Lawrence V. Lof and assisted by his students. A Historic Rehabilitation Practicum evolved from this work and now provides students in the Industrial Technology Department hands-on experience with historic restoration construction.

Imagining the Modern: The Architecture and Urbanism of Postwar Pittsburgh
Pittsburgh, PA

The Survey/Inventory Award of Excellence is given to the Imagining the Modern: The Architecture and Urbanism of Postwar Pittsburgh exhibition. In 2015, the architecture and design firm over, under was selected by the Carnegie Museum of Art’s Heinz Architectural Center to design the inaugural exhibition of a new initiative known as HAC Lab. The firm curated, designed, fabricated, and installed a nine-month exhibition with a series of programmed events and broadsheet publications (the results of this effort are currently being transformed into a book, to be published by the Monacelli Press in 2019).

Imagining the Modern sought to untangle Pittsburgh’s complicated relationship with modern architecture and planning and addressed both positive and negative impacts of the era by examining what took place during the city's urban renewal era, what was gained and lost, and what these histories might suggest for the city's future.

The Advocacy Award of Excellence is given to Starship Chicago: A Film by Nathan Eddy. The 16-minute short film proactively seeks to bring attention to the controversial and threatened 1985 James R. Thompson Center designed by Helmet Jahn. In the film, Eddy chronicles the significance of the building and its contributions to the architectural history of Chicago by layering provocative interviews with key stakeholders including Helmut Jahn, Stanley Tigerman, preservation professionals and architectural critics with dramatic panoramic cinematography that flies and often floats over the design.

The Advocacy Award of Excellence is given to long-standing Docomomo US/Georgia chapter president Tom Little. Tom quietly and persistently advocated for modern buildings in Georgia including the Constitution Building as well as the round Sun Trust Plaza branch bank building, which was recently added to the National Register of Historic Places after its near demolition for a mini-storage facility. Tom also sought to raise public awareness of the significance of the Atlanta Fulton County Central Library, designed by Marcel Breuer and completed in 1980.

The jury awards a Citation of Merit for the restoration of the 115, Geotronics Labs Building in Dallas, Texas. Designed by the noted architectural firm of Prinz and Brooks in 1962 for a geosciences company, Geotronic Labs, Inc. was the sole occupant of the building until 2003 and it then sat vacant for the next eleven years until 2014, when it was acquired and renovated by the architectural firm DSGN Associates for its own offices.

After suffering from a certain degree of benign neglect, the building was identified in an Authority-wide study as a prime opportunity for revenue enhancement. In 2008, the Port Authority of NY & NJ selected a developer and STV, Inc. as the restoration architects. Although the GWB Bus Station is not a designated landmark, it was treated as such, and conceptual efforts were shared with the New York State Historic Preservation Office and the New York City Landmarks Preservation Commission. Great attention was paid to developing a ‘modern intervention’ that is respectful of the historic structure, and in fact celebrates the structure, by its sensitive incorporation into the new program.

The jury awards a Citation of Merit for the sensitive restoration of the Lurie House, designed by Japanese architect Kaneji Domoto. Designed in 1949, it is one of five houses completed by Domoto in Usonia, a suburb in Westchester, New York. The Lurie House was part of Domoto’s experimentation with ‘Japanese’ motifs couched in low-cost construction, landscape design, and environmental responsiveness. Architect Lynette Widder and her team worked to sensitively restore the original building materials while finding creative solutions that brought the house’s heating and mechanical systems up to date but minimally impacted the original design.

The campus’ early buildings were designed by some of the most renowned figures in Los Angeles and San Diego Modernism at the time: William Pereira, A. Quincy Jones, Robert Mosher, and Lloyd Ruocco, and what resulted was a collection of buildings and landscapes were remarkably bold, and collectively stand as a showcase of Modernism in all of its forms. Ruocco’s Post‐and‐Beam style laboratory at Scripps (1963); Pereira’s imposing, Brutalist-style Geisel Library (1970), and the collection of Brutalist style buildings comprising Muir College (1967‐1971) are celebrated as some of San Diego’s very best examples of their respective Modern architectural styles.

For years, UC San Diego’s rich architectural history was well known but not well documented. The historic context statement and survey provide a level of nuance and detail that was not there before and generated an official inventory of historically and culturally significant sites on campus that will help guide future development in a manner that is sensitive to, and cognizant of, the campus’s historic character.

Harboe Architects, PC spent nearly a year conducting in-depth research and physical trial mockups to determine the best ways to authentically restore and fully modernize this international treasure. Completed in 2017, construction took over two years and involved all aspects of the building.

The restoration of Unity Temple not only returns this internationally significant work of architecture to its original appearance but gives new life to a building that will allow it to continue to successfully serve its original purpose as a house of worship for its congregation as well as a tourist destination for Frank Lloyd Wright enthusiasts from all over the world. The jury bestows this special award of restoration excellence for the high level of expertise and care that went into the restoration but also in recognition of the importance of the building to modernism that is without parallel.

The 2018 Modernism in America Awards will be awarded on the night of Wednesday, June 20, 2018, at the Design Within Reach Third Avenue Studio in New York City. Learn more about the award and this year’s winners, here.

News and project descriptions via Docomomo US.

Nine projects have been announced as winners of Docomomo US' 2017 Modernism in America Awards, honoring projects within the United States that highlight and advocate for the restoration of postwar architecture and landscapes. Now in its fourth year, the Modernism in America Awards were founded to celebrate "the people and projects working to preserve, restore and rehabilitate our modern heritage sensitively and productively.

Docomomo US has announced the winners of its 2016 Modernism in America Awards, which honor projects around the country that highlight and advocate for the restoration of postwar architecture and landscapes. The Modernism in America Awards is the only national program that celebrates "the people and projects working to preserve, restore and rehabilitate our modern heritage sensitively and productively. 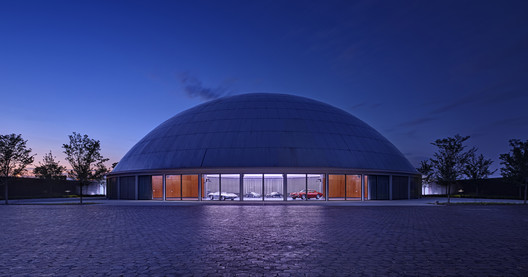