Save
Take a Deep Dive into Hong Kong's Unique, Chaotic Urban History Through this Documentary Series
Share
Or
Copy

Hong Kong is a unique city. With its unlikely history as a British Colony, its position as a global hub city, and its spectacular geography, the dense, lively streets of Hong Kong feature a variety of urban phenomena that can't be found anywhere else in the world. In this series of video essays, New Office Works probes the urban character of Hong Kong with stunning depth, uncovering histories and explanations that bring new intrigue to an urban fabric that is, both literally and figuratively, already heavily layered.

The title of the series, Middle Man, references Hong Kong's status as a city that mediates between east and west, calling back to the "compradors" that helped the city to grow in the 19th century by translating for traders—middlemen in the most literal sense. Rooted in this history, the urban environment is not one built on grand schemes or overarching ideals, says New Office Works: "The combination of a growing population and limited land has cultivated an instant-fix mentality. There is neither time nor space for architectural ideologies, only pure pragmatism."

New Office Works position their video essays as the natural way to analyze this pragmatic city. "Because Hong Kong’s urban landscape has undergone such drastic changes, its architectural qualities are easily diluted—by broad historical narratives or narrow typological studies that shuffle buildings into timelines and categories," they explain. "This project seeks to provide comprehensive analysis of individual architectures rather than a portrait of the city." The first six videos in the series can be watched below, with six more planned for future release.

You can find out more about the Middle Man series, or keep posted for new episodes, at the website here. 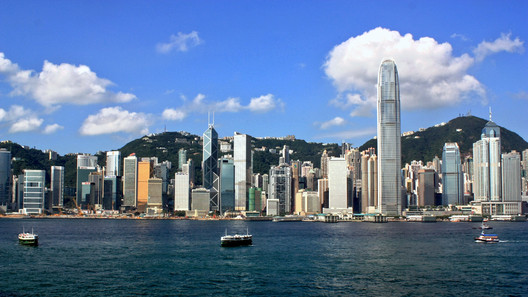