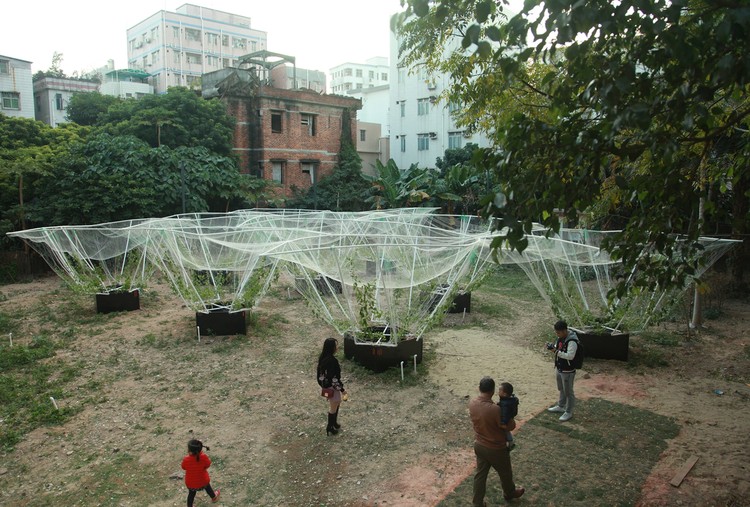 Text description provided by the architects. China, a country where farmers accounted for 97 percent of its total population one hundred years ago, has been run by farmers for four thousand years. Chinese folk wisdom about construction is, more often than not, hidden in some seemingly “heretical” ancient books including Guanzi. Diyuan Chapter, The Book of Burial, The Book on Agriculture and Exploitation of the Works of Nature. The history of traditional rural settlements in China demonstrates how Chinese agricultural techniques have evolved. These traditional rural construction works, led by small-scale peasant economies, are multi-field and trans-scale projects that have admirably inte-grated geography, irrigation works and agriculture. This type of production-promoting compound construc-tion has captured our attention and we have dubbed it “agri-tectonic”

In late 2015, Vernacular Research and Practice (VRAP) began to apply the concept of agri-tectonic to a num-ber of micro-projects. With “agriculture inclusive urbanism”, a means to realize urban renewal, we try to find the possibility of agriculture feeding cities by designing an experimental model. “Sky Farm”, located in a vil-lage in Nantou in Shenzhen, is one of these projects that emphasizes production-promoting compound public space in an urban village.

With ten thousand yuan, one could only buy an inch of land in the center area of Beijing or one square meter of space in Cangzhou, Hebei province, while with the same capital our team was able to build Sky Farm in an area of 400 square meters in Nantou village in Shenzhen. Sky Farm is an “agri-tectonic device” that functions simultaneously as a rain collector, an urban agriculture promotion and a community builder. Aiming to discover the potential ecological significance and productivity of “ur-ban villages”, Sky Farm, with minimal land occupation, manages to provide extra space for social gatherings as well as a brand new way to run a community.

In Shenzhen, around 10 percent of the land is covered by urban villages that accommodate nearly 50 percent of the city’s population. These urban villages exist as a special form in urban space where small-scale peasant economy is mixed with small-scale industries and where constructions are designed to potentially be inte-grated closely with local settlements. For urban villages that lack public space, Sky Farm is an iterative prod-uct that can transform cheap residential space into effective production space and unique consumer space, which is why Sky Farm is so suitable for the new urban village economy.

At a reasonable cost, Sky Farm can provide a highly productive space and thus help achieve the maximum promotion effect possible. PVC, easy to obtain in urban villages, has been chosen as the main material. Also, a standardized structure featuring convenient dismantling and transportation processes has been applied so that the device can be built even by ordinary people. On four sides of the device are farming nets for climbing vines with relatively large meshes to make space for plants and fruits while an anti-bird net is placed on the top for fruit protection and rain water collection.

Since the site where Sky Farm was built used to be filled with construction waste, an aquaponic system has been applied in Sky Farm for better plant growth as well as a means for possible alterations to the functions of the site in the future. With no water resource at the chosen site, nine “black boxes” have been set to collect rain water in which hundreds of fish are bred. Through a low-pressure water pump, “nutrient water with fish excrement” from those black boxes can be recycled to water and fertilize the plants. In this manner, a Sky Farm covering 400 square meters operates with extremely low cost, land occupation and maintenance. It is estimated that in a summer, Sky Farm is able to collect 300 tons of rain water, breed more than 200 fish and produce more than 200 jin (400 kilograms) of vegetables or fruits (cucumber has been taken as a test example).

Sky farm, with its treillage capable of resizing as required, can be built on rooftops, in streets or in any availa-ble space that’s larger than 1.5 square meters, making it a veritable “mobile farm”. As for the structure of this device, its lower part is designed to leave maximum space for public use while its upper part opens maximum space for plant proliferation. 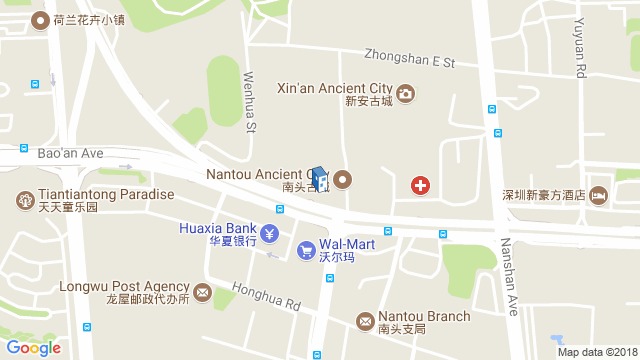 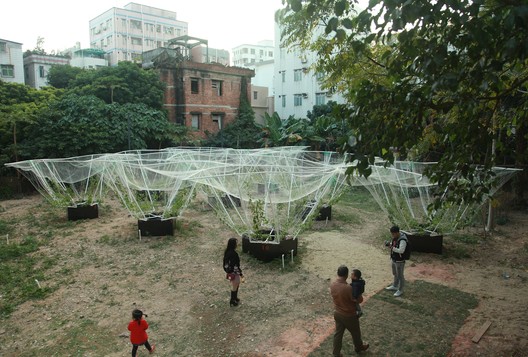