The 2018 Milan Design Week is now underway, a festival which this year is expected to attract over 300,000 visitors. Every year, the festival brings together a wide range of practitioners and design companies resulting in unusual yet fascinating collaborations and installations.

Below, we have compiled a list of collaborations to look out for throughout the week, including investigations into water, healthcare, and micro-living.

“Fifth Ring” seeks to create a new dimension inside the courtyard of Milan’s 16th century Seminario Arcivescovile. A circular ring set inside a square courtyard, the installation demonstrates mankind’s continued search for perfection and acts as a fifth façade when viewed from above. When viewed from below, the illuminated circle frames the sky, acting as a “portal to a fifth dimension” in a move which seeks to open up a dialogue between the observer and the infinite universe.
Date: 16th – 28th April 2018
Location: Seminario Arcivescovile - Corso Venezia, 11, 20121 Milan

“Altered States” sees a collaboration between leading quartz manufacturer Caesarstone and New York firm Snarkitecture, exploring the core theme of the kitchen island. Snarkitecture was inspired by the changing states of water in nature, through glaciers, rivers, and geysers, and in the kitchen, through ice, water, and steam. The installation consists of a central circular kitchen island, exhibiting the changing states of water through ice, liquid, and steam. Meanwhile, a surrounding “amphitheater” consists of over 250 Caesarstone and metal mesh pedestals, creating a white/grey gradient to emulate the appearance of a natural landscape.
Date: 17th – 21st April 2018
Location: Palazzo del Ufficio Elettorale di Porta Romana, Corso di Porta Romano 10, 20122, Milan

“Open Sky” sees a grounded, physical ring of reflected sky placed in the courtyard of the 16th century Palazzo Isimbardi. The tactile yet abstract installation seeks to reframe the historic architecture of the courtyard with the enveloping beauty of the Milanese sky. As visitors move through the colonnade, the Palazzo’s form is distorted and reconfigured, while approaching the center of the installation sees a dynamic shift in focus towards the sky’s transient clouds and colors.
Date: 17th – 22nd April 2018
Location: Palazzo Isimbardi, Corso Monforte 35, 20122 Milan

“Cells” investigates the relationship between technology, nature, and architecture in the hospital of tomorrow. Situated in the courtyard of the University of Milan’s Ca’ Granda, a former hospital founded in 1456, the installation explores the evolution of the world of healthcare by placing the visitor in an immersive, sensory experience. “Cells” consists of two glass structures, equal in size but with differing characteristics, placed at opposite corners of the courtyard to symbolize two perspectives on the future of healthcare.
Date: 16th – 28th April 2018
Location: University of Milan, Via Festa del Perdono 7, Milan

The Ca’ Granda also plays host to “Future Space,” an installation consisting of a symmetrical structure inspired by the Renaissance proportions of the historic hospital. The project explores the potential for timber as a sustainable future material, investigating the spatial experience transmitted by wood. The installation is constructed of over 1600 wood sticks, creating a cave of three separate wings gradually changing in height. The perforated structure filters light, facilitating a “playful game of light and shadow.” The caves’ three openings serve as an entrance and two framed views across the university courtyard towards other installations.
Date: 16th – 28th April 2018
Location: University of Milan, Via Festa del Perdono 7, Milan

“REVERSE ROOM” consists of an overturned black box, challenging the viewer’s reactions to a disruptive, abnormal spatial condition. The installation serves primarily as a vehicle for “The Light Bulb Series,” a collection of objects by James Wines which seeks to “blur the boundaries between art and design” using the light bulb as a subject. The installation includes five interpretations of the bulb; “Black Light” which inverts the functions and parts of the object, “Candle Light” which sees a merging of tungsten and flames into a new ambiguous object, “Melting Light” which consists of a bulb halfway between solid and liquid, “Plant Light” which shows a bulb overrun by nature, and “White Light” which sees a matrix of all exhibits.
Date: 17th – 22nd April 2018
Location: Foscarini Spazio Brera, Via Fiori Chiari 28 / Via Pontaccio 19, Milan

German startup Containerwerk has designed “Microliving” and “Temporary Housing” to explore the possibilities of high-quality life in small space using purchased sea cargo containers. “Microliving” uses a single container to unite all essentials for comfortable living, through a marriage of technical sophistication and creativity. Meanwhile, “Temporary Housing” manifests as a two-container unit inviting visitors to question the growing fusion of professional and private life, and the efficient use of existing spaces.
Date: 17th – 22nd April 2018
Location: Via Tortana 31, Milan 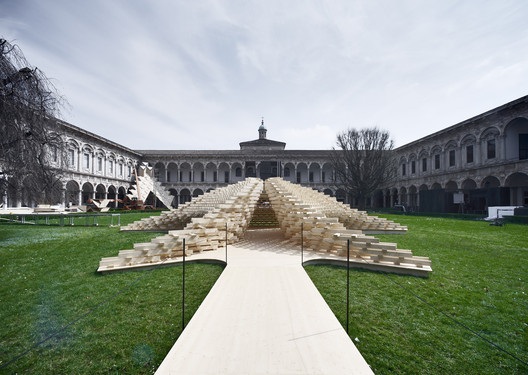