Taiwan has announced the scheduled October 2018 opening of the Mecanoo-designed National Kaohsiung Center for the Arts, also named “Weiwuying.” The Mecanoo scheme incorporates five state-of-the-art performance spaces under a single roof which, at 35 acres (141,000 square meters), stands as the world’s largest performing arts center under one roof.

Set across a 116-acre (470,000-square-meter) subtropical park in the southern Taiwanese city of Kaohsiung, the scheme will occupy a former military training base, symbolizing the city’s transition from a major international harbor into a rich, diverse, cultural hub, connecting local and international artistic talent.

When open, the scheme will host performances by the world’s top artists, including the Berlin Philharmonic Orchestra, in a variety of performance spaces. A 2,260-seat Opera House with a “proscenium” arch design will be equipped with the latest stage technology. A 2,000-seat Concert Hall in “vineyard style,” with seats surrounding the performance stage at all sides, will feature a 9,085-pipe organ, the largest ever built in Asia.

The scheme is also complete with smaller performance spaces, comprising a flexible 1000-1200 seat Playhouse, 470-seat Recital Hall. Connecting the building with the surrounding park, an outdoor performance space will host audiences of up to 20,000 people.

Weiwuying is one of Mecanoo’s most ambitious buildings and embodies all the key elements of our philosophy. Inspired by the beauty of the local Banyan trees with their iconic canopies of leaves, the vast, undulating structure is composed of a unique skin and roof under which generous free spaces can flow. We have aimed to deliver a flagship cultural destination for Taiwan, a beacon to attract performers and audiences from around the world.
-Francine Houben, Founding Architect, Mecanoo

In Progress: National Kaohsiung Center for the Arts / Mecanoo

24 After we won the competition in March 2007 the biggest question was how we would realise the building, and in particular how we would to manufacture the skin. The covered outside space, a seamless curved canopy would be reminiscent of the Banyan trees found in the park. 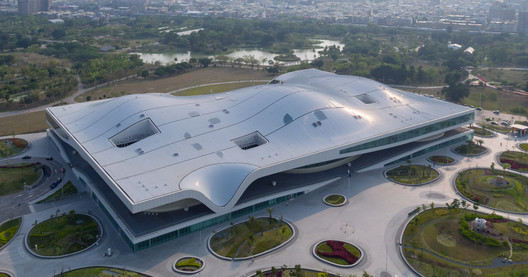