What do architectural drawings do? Convey visual information about the design of buildings. This much is certain. They do much else besides. They can be idiomatic and ideological, they can express the personality of those who make them and by whatever means—charcoal, pencil, pen, or computer program. They can inspire, provoke and radicalize. They might be realistic or the stuff of fantasy. Or, of course, they can instruct those charged with building a three-dimensional representation of what they see on paper or, in recent years, on computer screens. Intelligence visible, they can also be art.

So, judging an open competition of architectural drawings from around the world, like The Architectural Drawing Prize, can only ever be an exercise in open-ended judgment even when these have been sorted into three technical categories: Hand-drawn, Digital, and Hybrid. How do we begin to compare Chris Raven’s intriguing digital analysis of Publicly Accessible Spaces in St Paul’s Cathedral with Xinyuan Cao’s almost fond cross-section through the Renovation of Denggao Village, two commended entries in the Digital Drawings category? 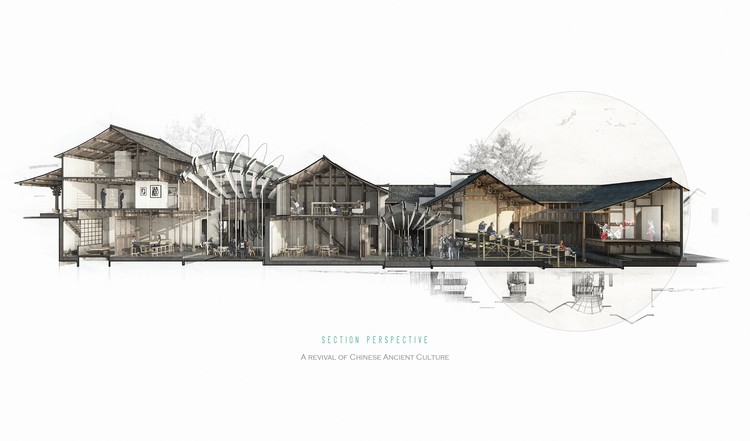 Is Reza Aliabadi’s 100, a ten-by-ten grid of Rubik's-Cube-like plays on the theme of the Platonic architectural cube, in any way comparable to Anna Budnikova’s finely shaded drawing of a Portuguese Street? Both are hand drawn and exquisitely so. While in the Hybrid section, Jerome Xin Hao’s colorful, playful and enjoyably complex perspectival Momentum Mori view through A Peckham Hospice Care Home is wholly different in intent from Mariapia di Lecce’s Reconstruct with drawing, a way of demonstrating how a graphic analysis of an Italian Renaissance building might help in its restoration.

Along with intelligence, this variety of contemporary architectural drawings by different technical means is also a demonstration of skill and a reminder of how the fusion of imagination and know-how continues to matter in a world in which computer-aided design and robotic modeling (and, increasingly, construction) appear to be making drawing irrelevant. From the sketch made in a café on a paper napkin to the most complex digital representation, drawings made by flesh and blood architects will continue to matter.

Aside from skill and artistry, the architectural drawing helps architects and their audiences—from clients to visitors to the Soane Museum—think in new and even unexpected ways. Chris Raven’s Publicly Accessible Spaces in St Paul’s Cathedral takes viewers on a tour of a seemingly familiar and well-known building through unfamiliar sections and perspectives, showing us the workings of Christopher Wren’s cathedral in ways we might not have known before.

In the context of the Soane Museum, and the 30,000 architectural drawings in its care, the manner in which drawings like these help us look anew is mirrored, for example, in the work of Joseph Gandy whose mesmerizing drawings for John Soane imagined how the architect’s buildings might appear and feel when they had fallen into ruin in centuries to come. Here were drawings of immense skill and ingenuity turning the world of Soane’s architecture upside down even as they explained and celebrated it. The thirteen commended and prize-winning drawings on show in the Soane Museum are in exactly the right company.

The winners of The Architectural Drawing Prize are on display in the Foyle Space at Sir John Soane’s Museum in London until Saturday, 14th April 2018.