The project inscribed inside a gasholder in St. Petersburg, aims to transform an industrial area into an educational and scientific center with a large projection screen. The fun part? It is located in a large geodesic dome.

The geometric model is made up of mainly with wood and metal links for a light and resistant construction. 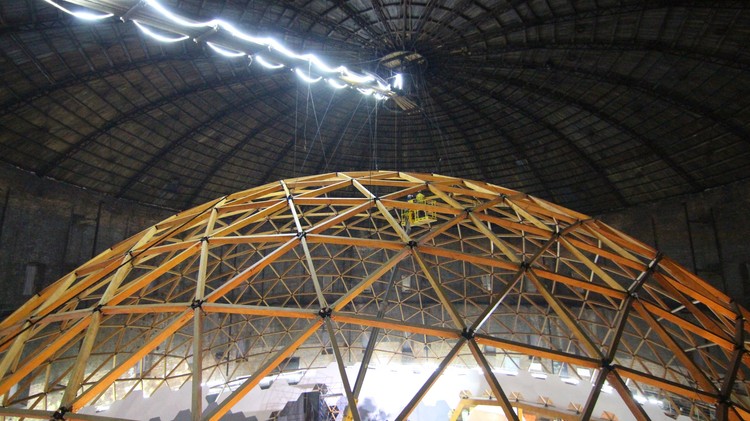 From the architects. The geodesic dome of the Planetarium is part of a large-scale idea to transform an industrial area into a modern architectural project and a scientific and educational center with "the world’s largest planetarium."

The central building of the planetarium is a gasholder on a water canal, an architectural monument with historical connotations. Built in 1884 by Rudolf Bernhard for the "City Lighting Society" of St. Petersburg for storage and supply of gas for street lamps, it has remained abandoned for 120 years since the appearance of electricity. In 2015, the future author and inspirer of the project saw the gasholder for the first time and a thought about a large planetarium that would be inscribed into the existing design came into his mind. Two years later, this dream, seemingly fleeting and incredible, came true — the planetarium was opened on November 4, 2017.

In this ingenious way, history gave a second chance to the gasholder by retaining its main function of lighting and recreating it with the help of modern construction technologies and visual projection art:

As before gasholder brought light on the city streets, now it will carry the light of knowledge to all the inhabitants of this planet.

Structurally, the gasholder is a brick tower of 42 m in diameter and 20 m in height, with a total volume of 40,000 cubic meters. On the top of the building, there is a Schwedler dome with radial metal trusses, connected by rods forming a self-stressed "bicycle wheel" structure. Such constructions laid the foundation for the development of lightweight load-bearing coating systems for large-diameter spaces.

The appearance of a geodesic dome inside the Schwedler dome seemed to demonstrate the next stage in the development of these kind of systems, based on a more optimal (in terms of structure) geometric model of construction. It is noteworthy that the first full-size geodesic dome (based on the icosahedron) also was a planetarium, opened in Jena in 1926.

Proceeding from the task of constructing a three-dimensional projection screen in a half-sphere of 37 meters in diameter, the corresponding scheme was selected. 10-frequency sphere dictated the choice of the material of its parts (foamed PVC). The geometry of the fullerene (hexagonal grid) is applied as a structure. Thus, in each triangle of the geodesic dome framework, a hexagonal element is inscribed. Each element is surrounded by other elements forming a single screen, which consists of 1400 parts of 36 dimension types.

The frame of the dome is made of LVL-beams (150×75 in cross-section) on steel connectors called "Haeckel" (named after the German naturalist, explorer of natural forms) that resemble starfish. In total, the framesett consists of 1500 beams and 507 steel connectors, and the weight of the whole structure is 20 tons.

In the process of construction, the engineers faced the challenge to design, produce and assemble a central projection sphere for 39 projectors that could evenly illuminate the huge screen of the planetarium. Given the overall hexagonal screen geometry, they decided to use the fullerene C60 molecule model for the external form of the central pyramid of projectors. Designers used cad-simulations of strength and airflows from heating projectors (generating about 18 kW of heat), selecting for the optimal thickness of the metal to lighten the construction and accelerate and simplify the assembling process.

Scientifically speaking, such a fractal nesting of fullerenes of the same frequency in another fullerene is literally called a "Russian matryoshka." It perfectly describes this historical object.

The project was designed, produced, assembled and launched in 2 months by the community of private dreamers, engineers, architects. Due to budget constraints and tight deadlines, the team mobilized a network of small local workshops, which designed various elements of the construction. The "DomesWorld" international community of dome builders brought them together in the construction site (10 to 30 people worked on the site during the whole month).

Evgeny Gudov and the team of the Art-technologies company worked on the Planetarium multimedia content and equipment, synchronization of projectors and public event design. His previous projects were dedicated to multimedia animation. He "animated" paintings by Russian and foreign artists ("Living Canvases") and created projection museums in various cities of Russia.

Now, the first part of the project — the planetarium and educational platforms — is implemented: there is a lecture hall and a laboratory-workshop. The next stage is the construction of a whole scientific cluster consisting of a star hall, a museum of space exhibits, VR-halls, education classes and an observatory. The estimated capacity of the planetarium after accomplishing the main stages of construction is 1 million persons per year. 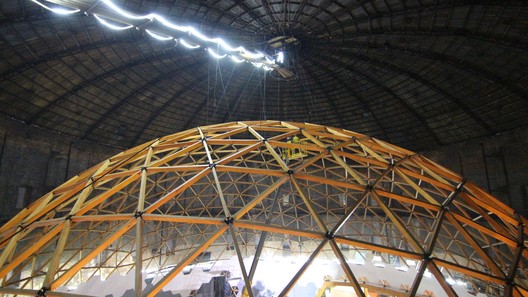