Blank Space, in collaboration with The National Building Museum, has announced winners of their fifth annual Fairy Tales competition, unveiled in front of a live audience at the Washington D.C. National Building Museum. The competition saw submissions from 65 countries, with 3 prize winners, a runner-up, and 9 honorable mentions chosen for their exploration of current events and the creative process through well-crafted short stories and artwork. The winners were chosen by a jury of 20 leading architects, including Daniel Libeskind, Bjarke Ingels, and Maria Aiolova.

Over the past five years, the Fairy Tales architecture competition has captured the imagination of thousands of participants from around the world – from students and aspiring architects to multinational firms and Pritzker Prize-winning architects. The competition has become a repository for the social and environmental issues that are at the forefront of architects’ minds and captures the most pressing themes in highly imaginative and sometimes provocative ways.
-Francesca Giuliani, Co-Founder, Blank Space

The winning entry for 2018 went to Louis Liu and Senyao Wei, whose narrative set in Beijing confronts the difference between physical and virtual perceptions of the city, within the context of news media. Read on to find out more about this Fairy Tale, as well as the remaining 3 winners and 9 honorable mentions.

First Prize was awarded to Louis Liu and Senyao Wei, both currently based in China, for their work entitled “Deep Pool That Never Dries.” The narrative questions the validity of news reporting within the city, and stresses the value of experiencing the city in real time rather than relying solely on third-party reporting.

We then began to think whether these news were really reliable? Of course they were not reliable. They were not written by reporters. They were written by a group of angry ordinary people. What were they angry about? Because Beijing, like every major city in the world, has a large population, it is crowded, and has many poor people. Therefore, we believe that the biggest problem in Beijing is not to disperse the poor population but to readjust the structure of the city. In this case, the so-called freer private media actually did a very bad job, in which it did not look at this in a greater picture and sought a solution, but instead focused deeply on the matter and complained. So at the end of the story, Lao Tzu's words means that if you want to reach the truest side of the city, then throw away all the media and its mediums, then every minute and every second of your life in this city is the most authentic look of the city.
-Louis Lui

Second Prize was awarded to Sasha Topolnytska, currently based in New York City, for her work entitled “Ascension.” The narrative is set in a future world shaped by the consequence of human activity, told through the medium of “the diary of the unknown survivor.”

The idea for my story is very simple: sustainability can no longer be just an option, it is imperative for the survival of humanity on this planet. The story itself does not go into defining major issues our plant is facing right now. Instead, the story takes us to a fictional future, envisioning a consequence from human activity. While “Ascension” is a story about Earth, who eventually must resort to defending herself by trying to rid her surface of all human and human made objects, it is also an emotional journey of people fighting to stay and learn how to be a friendlier neighbor.
-Sasha Topolnytska

Third Prize was awarded to Ifigeneia Liangi, currently based in London, for her work entitled “The Paper Moon.” The narrative seeks to challenge the idea of a classical fairytale, seeking to engage with wider ideas aimed at both adults and children.

I'd like to think of my story as a magical realist fairy tale, challenging ideas of the classical fairy tale, such as for example a linear rather than complex relationship between good and evil. I believe that in the new "antimythical" fairy tale, the quest of the characters should not only be personal, a greater awareness of the self, as we are not all striving for the same idea of happiness. Instead, I believe that narratives should engage with wider questions and ideas, with a clear and responsible voice towards adults, but most importantly, children.
-Ifigeneia Liangi

RUNNER UP: NEMESTUDIO for “Middle Earth: Dioramas for the Planet”

The Runner-Up position was awarded to the architecture office NEMESTUDIO for their entry entitled “Middle Earth: Dioramas for the Planet.” Drawing inspiration from dioramas in natural history museums, the entry questions how architecture can contribute to a new understanding of our contemporary environment with regards to politics and climate change.

The Middle Earth project is about architecture’s imagination of climate change. The question of the project was: In light of our current political crisis around climate change, what can architecture possibly contribute toward a new planetary imaginary of our contemporary environment beyond environmentalism? Their inspiration was dioramas in natural history museums and their interesting positioning between reality and fiction.
-Neyran Turan from NEMESTUDIO

The jury also awarded 9 honorable mentions to the following entries.

Zhang Haotian and Li Tianying for “How to Make an Architect”

Kah Mun Tham for “Red Cape and the Scarlet Knights”

Eric Wong for “Cohesion: The blueprint for a united kingdom”

Fouad Addou and Sulejman Gusic for “The Walls of Freedom”

Samantha Anderson for “The Torus”

Alberto de Salvatierra for “Cities of the Celestial Sovereigns” 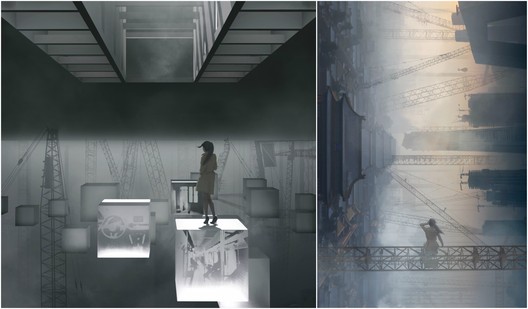