Save
Ma Yansong: “Some People May Say My Work Is Futuristic, But I See It as Traditional”
Share
Or
Copy

With the unconventional, undulating forms of his buildings—and the fact that his path to architectural success included a stint working for Zaha Hadid—Ma Yansong is often miscategorized as an architect of the latter generation of Deconstructivists, interested only in futuristic forms that push the boundaries of technology for the sake of innovation as an end in itself. But in fact Ma’s designs, especially those in his home country of China, are deeply rooted in nature and tradition, as he explains in the latest interview from Vladimir Belogolovsky’s “City of Ideas” series. 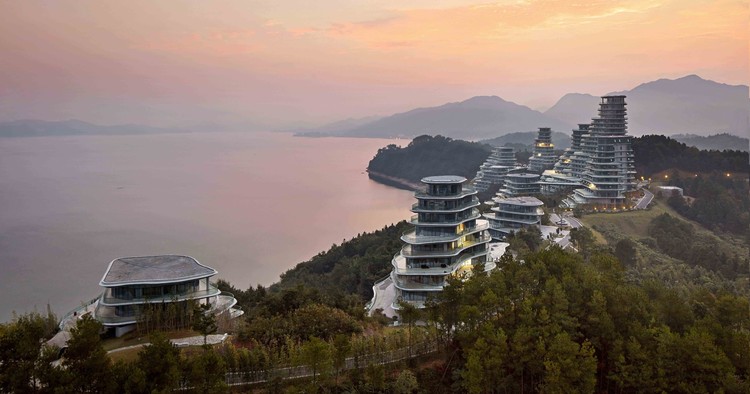 Vladimir Belogolovsky: If someone wants to understand what your work is about, what project would you show and what would you say about it?

Ma Yansong: To tell you the truth, I don’t mind if people don’t understand my work or who I am. [Laughs.] It is hard to choose because I am a different person while working on every project. Every project is about different emotions.

VB: One critic wrote that the Harbin Opera House is the most beautiful building in all of China.

MY: Yes. But for me, I even think it is too beautiful... Because when I design, I don’t really think about every line, proportions, or colors. For example, our Chaoyang Park Plaza, which just finished construction here in Beijing, contrasts greatly with its surroundings. If you think of the many buildings nearby or typical office towers in general, most of them are very similar box-like structures. They represent power and capitalism. Even Rem Koolhaas’s CCTV complex wants to outdo them all, not by building taller but by imagining the most original icon. But, as a result, it is a critique of the other towers, which makes his building even more dominant.

MY: My approach is different. The Chaoyang Park Plaza is very close to the park and lake, so I close my eyes, I close my ears, I don’t want to communicate with the manmade world; I only want to relate to the nature in front of me. And, if you insert our building into a traditional Chinese landscape painting, it fits very well. But if you look around and compare it to other buildings you may see it as something very bold and conflicting. Some people even say it is ugly. I don’t think so. Because culturally, it fits very well, but contextually, it is somewhat foreign because the urban context is not Chinese.

VB: The urban context here is imported from the West.

MY: Yes, but that’s the context that we now have and there is judgment about my work not fitting in.

VB: You said earlier that you don’t care if your work may be judged either as beautiful or ugly. What is it you care about? What is the main intention of your architecture?

MY: I don’t like what has happened to our cities, as this is the result of us having followed modernism for such a long time. Everything has started to look the same and lacks an inner spirituality. Nowadays, function is prioritized over nature and emotions. My architecture is about making a statement. But we are not making a building as an object, we are trying to create a landscape inside the urban environment. I derive my inspiration from traditional Chinese architecture where nature is an integral part of daily life in the city. I am looking for ways to adapt the Chinese traditions of blending nature and architecture to contemporary architecture on urban scale.

VB: You said your architecture is about making a statement. Now you have become a large office with projects being built all over the world. Seriously, how many statements do you need?

MY: [Laughs.] Well, despite that, I try to make every project differently and consider their cultural context, but the statement is always the same: I try to turn my architecture into a landscape and interweave its functions into the natural environment. Of course, this nature is artificial, it is manmade. There is no pretense about that, but the intention is to create an emotional experience, to reconnect humans with nature. It is not about creating a building as object to display its functions or technology. When I talk about nature, I mean emotions, spirituality. Nature is not a tree or flower; nature is an emotional atmosphere—a place where one can seek their innermost being. One of my heroes, for example, is Louis Kahn. In a way, he is an anti-modern architect because at the core of his work there is a conversation with nature.

VB: You said, “We should discover new ways to make humans and nature closer.”

VB: You also said, “I think it is important to practice architecture with an attitude.”

VB: What does it mean to you to practice architecture with an attitude?

MY: Drawing inspiration from culture. Being critical... Critical about the context... And really thinking about what kind of cultural impact we want to leave in our urban centers. Do you know what I mean?

MY: Well, when we started working on our Chaoyang Park Plaza tower I said – I don’t like any of the towers around; I wanted something different. Not like CCTV, but something more beautiful. I wanted to build something that would bring nature into the city context, and would make people rethink the approach we take towards future urban developments both in China and around the world. That’s an attitude.

VB: It reminds me the approach you just criticized... You look around and then you close your eyes, your ears...

MY: But I open my eyes to nature. That’s my attitude. Many of my projects are built more in opposition to their contexts. Sometimes, they are more integrated. In my Hutong Bubble 32 project built in central Beijing the bubble-like, futuristic form that contains a toilet and stairs to the rooftop seems to be alien to its historical surroundings, but at the same time it reflects everything around it with its shiny surface and, in a way, disappears entirely. Yet, this strange form attracts curiosity and opens the possibility for newly imagined spaces that promise to revitalize the historical fabric of the city. On the other hand, Harbin Opera House is isolated; it stands alone. My intention there was to create a mountain. There was no “crime” there before...

VB: Would you say that architecture for you starts with a conversation?

MY: Architecture for me is a conversation, in which I look back to the past and project my ideas into the future. Architecture is art, attitude, and emotions. All these things need to be linked.

VB: You said once, “I treat my projects as art.” Could you elaborate?

MY: Art is all about emotions. Art is about seeing things in a personal way. You can start a project with a site analysis or its function...

MY: No, I don’t. My emotions come from the cultural context. Each location represents a particular culture and brings out a different attitude, and mood in me. I look for different ways to respond to projects that are relevant to their particular context.

VB: When you talk about your architecture, you often refer to the idea of Shan Shui, which is a style of traditional Chinese brush and ink landscape paintings featuring mountains, rivers, and waterfalls...

MY: Shan Shui is a cultural typology. It is not just limited to paintings. You can come across Shan Shui music, poems... even urban planning. It refers to both aesthetic and spiritual values.

MY: I grew up right here, in old Beijing. The city was originally planned around lakes and gardens. They are all manmade, but collectively the interweaving aesthetics with functionality gave the feeling that we were immersed in this verdant landscape; while the nature created here is imaginary nature, it is what people perceive of as nature, not nature itself. This is what modern architecture is lacking, an inner spirituality. I want to bring this into our urban centers. Shan Shui is a philosophy; it is about establishing emotional connections to nature. And this concept can be applied to projects on many different scales, even the large urban scale, in both our existing cities and newly developing ones. This is what I am trying to do with my Shanshui City vision, as you can see in my project Huangshan Mountain Village. The village blurs the boundaries between the geometries of architecture and nature; it is part of the local landscape and geology.

I like how nature is a part of the city here in central Beijing, but I don’t like how it is missing from new neighborhoods. So, as an architect I want to take these key features of traditional architecture and translate them into new developments on a much bigger scale than we are building today. And I want to bring something unfamiliar into these new projects. I want to build buildings that no one has ever seen before. I don’t want the middle ground. Some people may say my work is futuristic, but I see it as traditional because I carry old Eastern philosophy and use it to respond to new challenges. 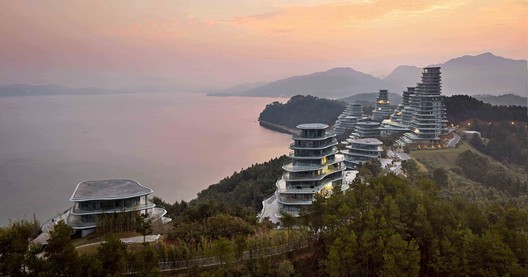