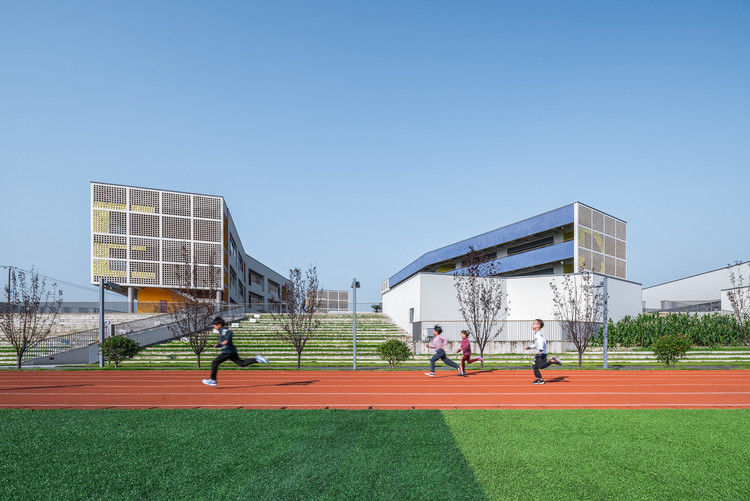 Text description provided by the architects. Located in Anting new town of Shanghai's Jiading district, Tongji University Experimental Elementary School project consists of teaching buildings, an administration building, a canteen, a gym, and elevated passages. Following the context of the original site, classrooms, offices and a sports space are connected in series through courtyards of different scales and different kinds of enclosures according to functional demands. The design of the architectural ensemble as well as its buffer spaces are well integrated into the townscape.

New town setting and South Yangtze River context
The elementary school is located in the gateway to Anting new town. In response to large urban traffic flow, the playground is placed near the main road on the east side as a transition, providing open views to the new town.

The cascading terraces next to the playground is evolved from the initial concept of "slope" to "steps" with grassy "tread" and concrete "riser". In this case, slope is retained while the program of a grandstand is satisfied. In other words, landscape is used as infrastructure.

Multiple spacial sequences and themed courtyards
The program of school accomondates a wide spectrum of dynamics, thus the focus of design is to explore variations and possibilities in spacial relations. The design team fully considered the psychosomatics of teachers and students to help decide the scequences of openness and enclosure, suppression and release. Open courtyards, passages and sports fields are orchestrated to achieve a sense of depth and cheerfulness.

Establishing multiple sequences of spaces helps to encourage children to explore in different surroundings. Upon entering the campus, visitors go first through the corridor that connects the whole campus, then three polygonal courtyards one after another. The semi-opened passage has double circulation levels, and it is also an important space for after-class activities. There are three themed courtyards in the teaching area: humanities, science & technology and art. And three groups of labs and studios with relatively low spacing and sunshine requirements are placed around the courtyards on first floor. Canteen and administration building each has a courtyard bringing skylight in.

On the second floor of teaching zone, the elevated passage is expanded to a terrace with rerubberized play zones, which enables children on 3rd and 4th floor to play on the second floor. These play zones are right above the studios and labs on the first floor and the air vents of those special classrooms are covered with children's stools. The terrace extends to the stepped turf and then the playground on the east.

Outdoor paths are paved with traditional grey bricks, and different geometric motifs are chosen for different characteristics of spaces. Straight line elements are applied in the themed courtyards with stepping stone extended from the edge of the corridor while more curved paths on the periphery green area. The fire lane on the northside of the teaching building is also brick-paved, like a vine stretching itself from the bough. Different types of trees are planted around the entrance plaza and courtyards, bringing different spatial memory of four seasons to teachers and students.

Architectural design and details
Teaching building
The design of the teaching buildings emphasizes the depth and the reflection of the riverside elevation. Massing of each teaching building turned in the middle to meet the code and red line requirements. The ultramarine glazed mosaics of south elevation present a rich and delicate visual effect in the sunlight, while in the large scale urban portal space, they put a protean and fading-away look to the building volume.

Three teaching buildings are in long and bended shape. Their typical floor consists of four classrooms grouped in two and two. The bending parts of the buildings are opened to the south and connected to the semi-opened corridors, which not only expands the corridor spaces but also directs the sight to the north. The staircases on the east also provide varied experience: they merge  into the courtyards at the first floor level; when on the 2nd floor terrace, sightviews open widely; stepping onto 3rd or 4th floor, one would sense half enclosure by concrete brick lattice walls.

The south wall of the classroom is 600mm in width, thus seating is integrated at the height of 300mm and 600mm. Air conditioners are hidden behind the aluminum grid in the north elevation. In order to balance the composition and supplement indoor day lighting, glass bricks are used on its symmetrical side.

Canteen
The canteen also takes pentagon as a prototype, with kitchen and teachers' canteen on the first floor and students' on the second floor. French windows facing the green area and the middle school are set on the south and west side of students' canteen to widen the view. The canteen is connected with administration building on the north and teaching building on the south by corridors on both first and second floors. On the east side of canteen, the corridor is flanked by the same concrete brick lattice wall, bringing out introverted atmosphere. The pentagon courtyard in the canteen introduces daylight and forms a sequence with other pentagonal courtyards along the corridor. The difference is that, the inner surface is decorated with the same ultramarine glazed mosaics used in teaching buildings, and there are stairs leading to the second floor. Following the axis of the building, suspended ceiling folds up and makes full use of the interior net height.

Administration building
The administration building is a court house composed of south and north wings with corridors on east and west. White wall of north-south elevation and concrete brick lattice wall of east-west elevation builds up a contrast between the solid and the airy. The lattice wall of the east elevation and the white wall of the stadium shapes the main entrance square. The lattice wall of west elevation in a way shades the building from the sunlight, meanwhile it acts as a complete architectural interface to the middle school. Again, ultramarine glazed mosaic is applied to the inner surface of the courtyard , and glass blocks are used at the west of the 1st floor, right facing the entrance of the courtyard.

Gym
The gym is a relatively simple large-depth sports space. Through detailed sunlight analysis and comparison of proposals, three large-scaled french windows up to 3 meters are set in three sides for lighting and ventilation. Besides, above the rooftop at 10 meter, skylight is elevated another three-meter above with extraction fans flanked at one side.

The perforated metal sunshades under the skylight is low-tech but effectively integrates structure, pipeline, lighting and curtain wall structure. Serving the largest space on campus, the skylight functions as draft hood while provides natural lighting. Such passive energy-saving measures makes the gym one of the most user-friendly, comfortable and popular places on campus.

Dual experiment
Due to norms and popularity, the design emphasis of education architecture (especially for the public ones), to a certain extent, differs from many other kinds of cultural buildings or landmarks. Through this project, from the initial planning, to design and construction stage, later to the evaluation after being put into use, the design team focuses not only on architecture itself, but trying to explore how to shape and inspire students' daily learning and playing through the campus design. Education is not only about acquisition of knowledge, but also about development of body and mind. In this sense, Tongji experimental primary school is a dual experiment of both education space and education concept. 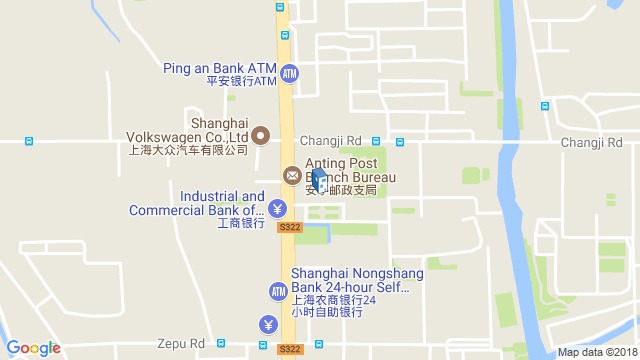 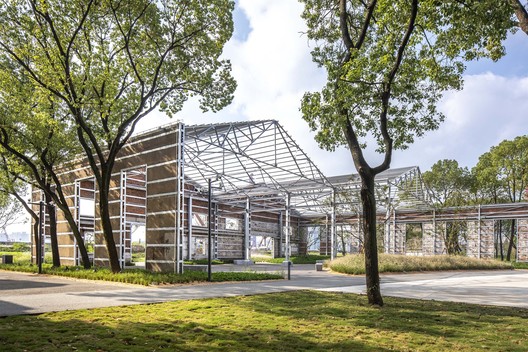 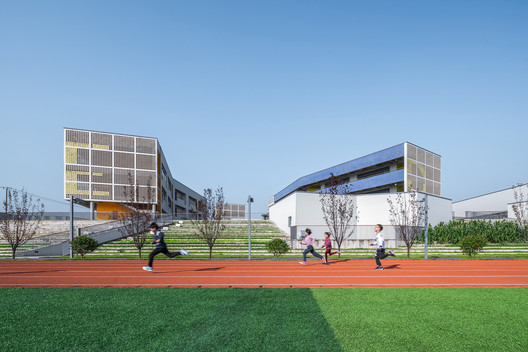