Within a week of its successor being awarded the Silver Lion at the 2016 Venice Biennale, the original Makoko Floating School collapsed. Designed by Nigerian architect Kunlé Adeyemi of NLÉ Architects, the school was located in the Lagos Lagoon in Nigeria. Now, almost two years later, Lagos-based writer Allyn Gaestel has investigated the vulnerable coastal community and architect behind the project in a remarkable narrative nonfiction piece, "Things Fall Apart."

Is the story of Makoko Floating School one of a noble architect’s attempt to do good or a growing ego in search of fame? As Gaestel writes, “Heroes and villains are rarely pure.”

Gaestel details the complex moving parts and characters embedded in Makoko Floating School. In the beginning, Adeyemi collaborated with Isi Etomi, a young architect and native Lagosian who compiled a two-volume proposal outlining realistic ways to upgrade the financially distressed neighborhood. As Adeyemi’s excitement to create a school on water grew, so did the budget. Eventually, Etomi stepped away from the venture, and so did the funding. But Adeyemi only seemed to work harder—even when police raided Makoko on speedboats, cutting homes down with chainsaws in a violent eviction process. Adeyemi’s role became one of not only architect but advocate for the people of Makoko as well. Finally, the school was completed and left under the care of Noah Shemede, the Makoko liaison and school director.

Gaestel brings to light that while Makoko Floating School was being internationally praised for its resilient and humanitarian spirit, the school only held actual classes for about four months in its three-year lifespan. Some architects still consider the structure a worthy prototype for future innovations, but, before its collapse, the residents of Makoko saw it as much more than that. At times, the school, and subsequent national attention, represented a true beacon of hope to what is still an unstable community. Ultimately, as Gaestel's article makes clear, the story of Makoko Floating School isn't easily boiled down.

Read the full story at The Atavist Magazine, here. 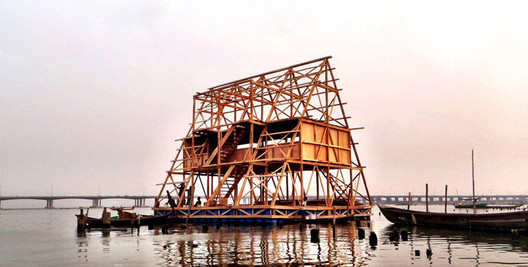