This article was originally published by Redshift as "Architect Sou Fujimoto Has Radical Ideas for Familiar Communal Spaces."

The destruction wrought upon Ishinomaki by the 2011 Great East Japan Earthquake and Tsunami damaged the city’s civic hall and cultural center beyond repair. To rebuild, Ishinomaki City wanted to create a landmark combining these two facilities into a new complex—one that would be like a city unto itself, serving the community.

In 2016, design proposals were screened in a process that included public presentations, with many locals participating. In the end, Sou Fujimoto, a leader among the next generation of Japan’s architects, was selected for his innovative design.

The planned site, set off from downtown, is surrounded by residential areas and a scenic mountain backdrop. “I wanted to create a new landscape for Ishinomaki that people would find familiar both from near and afar,” Fujimoto says.

Working on projects around the world from his studios in Tokyo and Paris, Fujimoto aims for structural forms that are simple and subtle in nature, yet distinctly otherworldly and playful. He has designed everything from bus stops, public restrooms, and private homes to university facilities and office buildings. Recent works include the Musashino Art University Museum and Library built in 2010, and the 2013 Serpentine Pavilion installation in London’s Kensington Gardens—previous winners of the commission include Frank Gehry and Zaha Hadid.

But among his projects that have reverberated through the architectural world, his plans for the Ishinomaki Cultural Complex Center stand out. Construction will begin in fall 2018 and is scheduled to be completed in spring 2021.

The Ishinomaki Cultural Complex Center presented particular design challenges. One of the requirements was to include a theater, and so a “fly tower” (an open vertical space above the stage) had to be built to store lights, curtains, and other equipment for performances. “Since the fly tower has to be a certain height, it inevitably takes on a unique shape,” says Fujimoto. “How could I soften its imposing form and make it a building dear to the city’s people?” This was the inspiration for Fujimoto’s concept, in which the civic complex would resemble a series of buildings in a lively town.

Ask a child to draw a house, and she will almost invariably draw a box with a triangle on top to indicate the roof: This shape could be considered a universal symbol for a house. The prototypical “house” shape can be seen in many of Fujimoto’s architectural plans, but within this familiar image, his designs play with form and style.

The “buildings” of the “town” making up Fujimoto’s plan for the Ishinomaki Cultural Complex Center are actually a single connected structure with ceilings of varying heights. The space with the tallest ceiling soars to an impressive 25 meters (82 feet). “The individual ‘buildings’ are quite simple,” says Fujimoto. “I thought that if we took these basic forms already etched into peoples’ memories and combined them, we could create a familiar place that could be anywhere, yet does not really exist.”

Designers commonly submit BIM data to enter international competitions, but Fujimoto has always contracted out BIM model creation after completing his design. However, for this project, since it would be difficult to precisely integrate air conditioning and electrical equipment into the triangular roof design, Fujimoto introduced BIM early in the process, carrying out his design work in Autodesk Revit. Now, fine adjustments are being made in cooperation with the engineering consulting firm Arup.

“In addition to the technology we have at our disposal, time-tested design methods, such as building architectural models by hand, are essential to our work,” says Fujimoto. “We make the most out of both digital and physical methods. Building a model by hand gives us insight into an idea that can be tested in the digital space before being reflected back into the physical model. Going forward, I would like to continue fully utilizing this back-and-forth between the digital and physical worlds.”

In stark contrast to the familiar shapes found in the Ishinomaki project, Fujimoto’s mixed-use housing tower under construction in Montpellier in southern France is an eye-catching building with a radical design. The tower, named “L’arbre Blanc” (The White Tree) is located between the new and old districts of Montpellier, incorporating plans for common areas, office spaces, a restaurant, and an art gallery. This project was also the impetus for Fujimoto to open his studio in France.

Montpellier faces the Mediterranean Sea, and even in the winter the weather is warm enough to enjoy lunch on an outdoor terrace. Fujimoto sought to create a 50-meter (164-foot) tall, 17-story building where residents could enjoy the region’s traditional outdoor lifestyle at home. Ultimately, he created a daring design in which long terraces are placed outside every living room and bedroom in the complex.

Each unit has multiple living spaces seemingly suspended in the air, with larger terraces reaching six meters (19 feet) wide and eight meters (26 feet) long. “What we came up with was a very unique building,” says Fujimoto. “It’s like a pinecone, or a head of broccoli, or some kind of tree—its organic complexity is reflected in our natural world. It completely diverges from the blocky, concrete designs prevalent in housing complexes up until now.”

Fujimoto’s design for the project was green-lighted by Montpellier’s mayor and city planners. “At first, they were quite surprised,” says Fujimoto. “However, I was able to get them to understand how this previously-inconceivable design preserves the scenery and traditions of Montpellier while also paving the way for its future.” The project is scheduled to be completed in September 2018, but almost all the units have already been sold.

This meeting of nature and architecture, the physical and the digital, the old and the new—what at first glance seem to be elements in opposition are, as Fujimoto says, “coming together in a new age of fusion in the 21st Century.” His speech at Autodesk University Japan 2017 shared this vision for the future of making things in architecture, and through Fujimoto’s architectural design work, the world is getting a glimpse into that promising future. 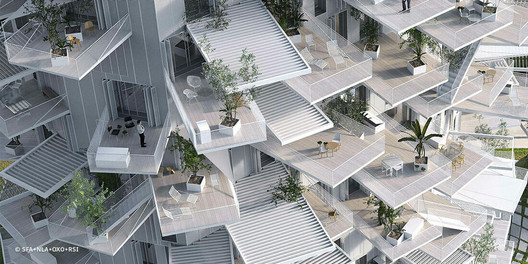