Rem Koolhaas & David Gianotten / OMA’s 2017 MPavilion has found a permanent home at Monash University, Clayton, the Naomi Milgrom Foundation has announced. The news marks the fourth MPavilion to be gifted to the public by the Foundation.

“The relocation of Rem Koolhaas and David Gianotten’s MPavilion to Monash University ensures it will continue to be a dynamic incubator, where ideas about architecture, design, and creativity are encouraged and nurtured. I’m extremely pleased that it will carry on inspiring our young practitioners,” said Naomi Milgrom AO, founder of the Naomi Milgrom Foundation. 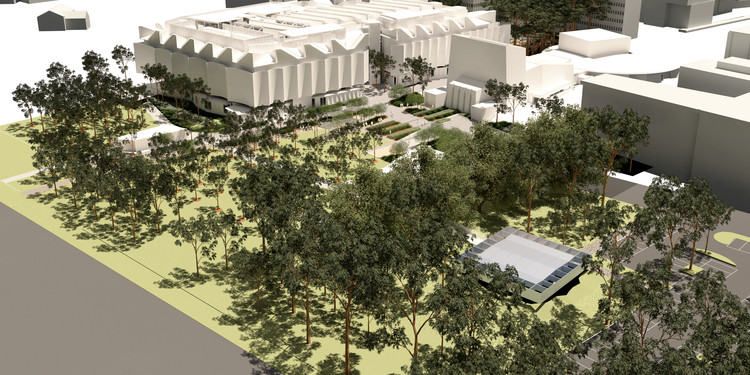 Site work at Monash University is already underway, with a grand opening scheduled for May 8th. The pavilion will be located at the front entrance to the Clayton campus, adjacent to the new Learning and Teaching Building by John Wardle Architects.

“We are pleased that OMA’s MPavilion 2017 will be relocated to one of Melbourne’s universities; places of knowledge and debate,” commented Rem Koolhaas & David Gianotten of OMA. “MPavilion will engage and support the development of Monash University and the City of Melbourne. We look forward to seeing it in its exciting new context.”

The 2017 Mpavilion program closed on February 11th after being extended due to popular demand. In total, the 2017 pavilion received more than 117,000 visitors and hosted 477 free events over 133 days.

The 2018 MPavilion will be designed by Carme Pinós of Barcelona-based Estudio Carme Pinós. Learn more about the 2018 pavilion here.