The Naomi Milgrom Foundation has announced that the fifth edition of the MPavilion will be designed by the Spanish architect Carme Pinós. The MPavilion 2018 will be the first public work commissioned to a Spanish architect in Australia and will be the successor of the pavilion designed by OMA / Rem Koolhaas and David Gianotten in 2017. The 2017 pavilion received more than 117,000 visitors and hosted 477 free events over 133 days.

On the choice of the Australian foundation, Naomi Milgrom stressed that Pinós' career "honors the responsibility of architecture to serve a community, by creating spaces that place human experience and environment at the center of her designs."

Since its first edition in 2014, the MPavilion has received 351,000 visitors and its fifth edition—to be inaugurated on October 8, 2018—expects to repeat the success of previous editions. Regarding the assignment, Carme Pinós commented:

It is my honor and pleasure to have this opportunity to design a new pavilion for the Naomi Milgrom Foundation. It is a great responsibility to create a unique place in this special park with views over Melbourne—a city to which I have deep attachments. I am inspired by the fact that this new project will become a cultural destination for the city.

As the winner of the Berkeley-Rupp Award in 2016, Pinós has been celebrated for her contributions to gender equality in the field of architecture. With her humanistic approach to seeing architecture, she has been in charge of noteworthy projects related to urban remodeling, social housing, public works and furniture design. Among her most significant works are the Crematorio de Igualada in Barcelona, the CaixaForum Zaragoza and the Cube 2 Office Tower in Jalisco, Mexico.

The MPavilion is supported by the Mayor's Office of Melbourne, the State Government of Victoria through Creative Victoria, and ANZ bank. 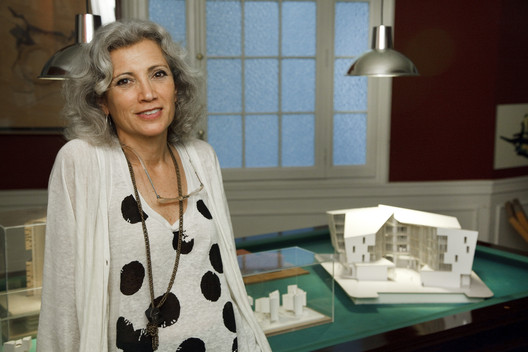