Save
Grit vs Globalism: What the City of Blade Runner 2049 Reveals About Recent Trends in Urban Development
Share
Or
Copy

There ought to be a word for this kind of film—halfway between a sequel and a reboot—but there isn't, so we just have to call it Blade Runner 2049. The film is perhaps more subtle in the way it refers to Ridley Scott's 1982 dystopian cult classic than some recent sci-fi restorations—Star Wars: The Force Awakens, I'm looking at you—but it isn't above a bit of blatant parallelism. For example, it's easy to see reflections of Blade Runner characters in 2049: private dick Rick Deckard is now the stoic, world-weary K; femme fatale Rachael is Joi, a hologram companion who straddles the line between mortal and machine; wacky Roy Batty is the single-minded, murderous Luv; not to mention a bevy of replicants passing for humans and cops with hidden agendas. In fact, one of the few prominent characters not recast is the city of Los Angeles, whose architecture is strikingly absent compared to the first film. The resulting movie feels curiously devoid of a civic soul, which is perhaps the point.

Los Angeles in Blade Runner was a paradox: dead but vibrant, dirty but drenched in rain, overcrowded but in the constant process of being abandoned. It's a complex heritage that belongs to both the city and cinema. Los Angeles has been used as a setting for many films, and its unique architecture has been invoked by filmmakers and studied by art historians on screen. The city has been so prominent throughout cinema history, in fact, that films such as the 1955 noir Kiss Me Deadly can be considered a kind of cinematic primer on LA architecture that isn't there anymore.

One need look no further than the use of the Bradbury Building. The downtown Los Angeles landmark is hardly camera shy. It has been used in both film noir (D.O.A., Marlowe, Chinatown) and science fiction and fantasy (The Outer Limits, The Night Strangler) since the 1940s, so its use in Blade Runner was almost a given.

In fact, that film's climactic final battle through the Bradbury is probably the building's most famous role. That it can feature in films from the 1940s to the fictional 21st century suggests the timeless nature of the Bradbury's construction, which is reflected by the futuristic LA's distinctly eclectic architecture.

Accordingly, the Los Angeles of Blade Runner is not too different from the Los Angeles of Chinatown. Both films understand that Los Angeles is about space, both the potential of empty space and the crush of filled space. Compare Deckard fighting his way through people and animals on the LA streets around Taffy Lewis' club with the crowd that suddenly surrounds Jack Nicholson's J. J. Gittes at the end of Chinatown. Each scene makes a crowded urban space seem oddly weightless: Blade Runner thanks to slow motion and Chinatown thanks to airy photography.

Both films also understand the ominous, Gothic nature of the city's buildings—what was Spanish Revival in Chinatown becomes Beaux Arts in Blade Runner. One might argue that Blade Runner has a burnt-out and used-up streak that is missing from Chinatown, but consider the central theme of the latter: water and its importance to civilization. Faye Dunaway's well-groomed estate is just a drought away from resembling the desert-like underbelly of the LA River, where Gittes encounters cracked earth, an abandoned set of furniture and a lone boy on a donkey. If it had been raining, the scene could have been in Blade Runner.

This surreal distinctness has evacuated by 2049. For one thing, the narrative doesn't stay in Los Angeles—the film even opens north of the city. And these far afield locations lack identity. There are no landmark structures. LAPD headquarters in downtown Los Angeles really doesn't seem that different from the central California farms or endless dumps of San Diego. There also isn't much variation within the scenes themselves. While Blade Runner was filled with contrasting light and shadow, 2049 has a monochromatic palette, practically in all caps: farmland is GRAY; Las Vegas is ORANGE; a night out at the beach is BLACK. It's as if color is a stand-in for architecture.

In fact, if there is any holdover of notable local scenery, it's the ubiquity of public advertisements—and not just because of the “Blade Runner curse.” In our own time, the billboards of Sunset Boulevard in Hollywood are infamous for an omnipresence that approaches garishness. In the future of Blade Runner, corporations that cross borders as easily as pandemics bombard an increasingly disillusioned population with glitzy images. By 2049, commercials are even more invasive. Late in the film, K encounters an enormous advertisement (PURPLE) for the Joi hologram on the city streets. She is at once familiar and indistinguishable from every other lonely man's Joi—a giant who stretches up and down the coast, eschewing individuality for unity. Overwhelmed, K collapses.

The future is now homogeneous, an unfortunate side effect of globalization. When global culture is local culture, Los Angeles looks like San Diego, so why shouldn't Sunnyvale, California, resemble Qingdao, China? Along with the uniform pollution and the melting pot blandness that began with city-speak, the future of 2049 may not be as architecturally distinct as before, but it's no less terrifying—and cinematically impressive—than it was in Blade Runner.

Colin Newton is a Los Angeles based freelance writer. His work has appeared in local newspapers and blogs, and he frequently covers arts and culture. He writes about film, philosophy and more at IdolsAndRealities.wordpress.com. 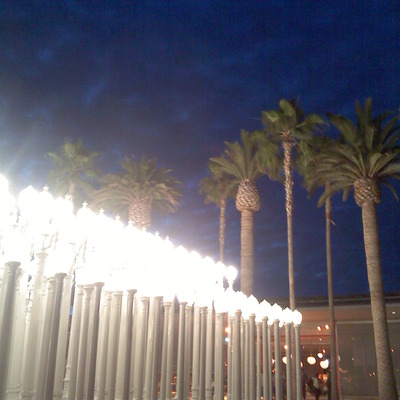