Blade Runner 2049, the recently-released sequel to the 1982 sci-fi classic, has prompted a deluge of interest in the futuristic, dystopian world in which it is set. However, it seems that some architects may have a more direct interest in the film than usual, as images surfacing on Twitter show an uncanny similarity between some of the film’s concept art and a 2010 design by Spanish practice Estudio Barozzi Veiga.

The image in question, tweeted by the film’s concept artist Peter Popken, shows concept art for the office of Wallace, the film’s main antagonist. As highlighted by another Twitter user Laura Broad, the image bears more than a passing resemblance to an image produced by Estudio Barozzi Veiga for their unbuilt 2010 design for the Neanderthal Museum in Piloña, Spain. ArchDaily wanted to know more about the incredible similarities, so we contacted Alberto Veiga for comment, who was in Santiago, Chile (ArchDaily's headquarters), for a symposium and lecture at the Universidad San Sebastian.

Veiga confirmed that a copyright company working for Blade Runner 2049 contacted the architecture firm approximately a year and a half ago to ask for permission to use the image of the Neanderthal museum in the film. They even showed the architects the modified version that was going to be used in the movie, but they did not tell Barozzi Veiga for what or in what part of the film the design would be used. Over time, the architects forgot about it and assumed that someone decided that spatial conception would not be included in the movie. But they eventually saw the Blade Runner 2049 trailer, and their unbuilt project from 2010 sprung back to life.

When we asked Veiga what he felt about the image that he designed together with Fabrizo Barozzi exuding such drama and effect that it was used in the production of a majorly anticipated Hollywood movie as a villain's den, he said,

“It’s fantastic! It’s good to know that projects that you design but aren’t built can have other outcomes. Go figure that now our design has been immortalized in Blade Runner!”

We are awaiting comment from Peter Popken about how Barozzi Veiga’s project made it onto the big screen.

Correction Update: This article originally referred to Wallace as the "main protagonist" of Blade Runner 2049. He is, in fact, the film's antagonist. ArchDaily regrets the error. 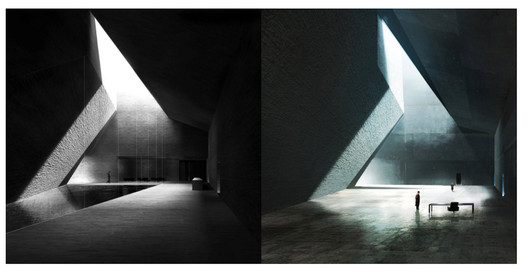