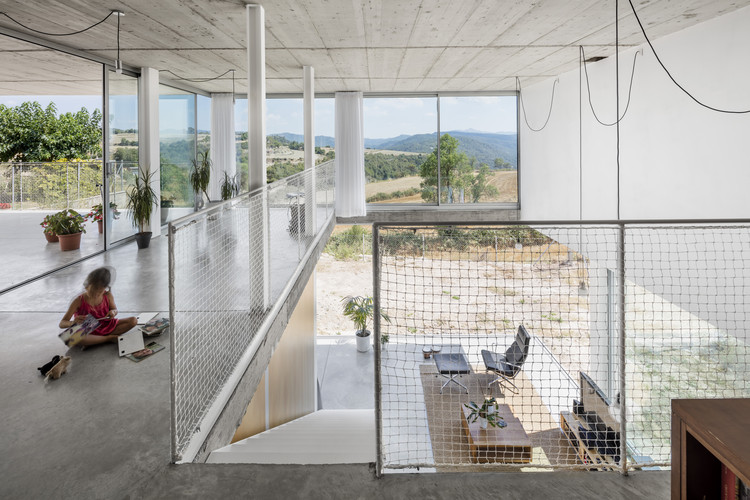 Text description provided by the architects. The house, located in Calders (a small village in the centre of Catalonia), is the new home to a couple with two children. The site is at the end of the village with the natural park of “Sant Llorenç del Munt i l´Obac” just in front.  They requested to include an office, common living space, three private rooms, two bathrooms and a garage.

The site has a slope of one floor. All the houses of the neighbourhood have the garage in the ground floor next to the garden and the living space area in the upper floors. Our decision was to make the opposite. We placed the garage and the studio in the upper floor at the level of the street and the common living area and rooms in the ground floor in order to connect them with the garden.

The acces through the garage is used as a garden, a porch, a flexible in-between  space. A double-height at the living and dining area opens onto the garden and the natural park. A steel staircase in white match the flooring on the lower level. The staircase is flanked by wires to accentuate the lightweight airy feeling you get from being height up with a view down to the rest of the house.

This is a house with a very small budget but with open-minded clients. We wanted to create “just a roof”. The house is a “bay window”, designed to draw the eye from even the most breathtaking landscape.  In order to emphasize the natural environment, we create a structure of concrete horizontal slabs with columns of steel H-sections of 120mmx120mm to create a building with no walls. The structure defines the form of the house.

We wanted to design a house that is more like exterior garden than interior, a space in which furniture and plants are placed directly under the blue sky. Our aim is a living space with a feeling of openness and connection to the richness of the environment.

A series of sliding glass doors transforms an indoor space in an inside out. The wall-less transparent building provides an environment with maximum sunlight and well natural ventilated.
To achieve a multifunctional and flexible space that can be opened and closed we added a space in-between the rooms and the garden. From that the residents may go outside to feel the breeze.

We wanted to create a continuity between the natural setting and the house. We wanted to bring the exterior in and became part of the interior, where the inside and outside were surprisingly continuous. We like the idea of designing a house with the feeling “Volkswagen camper van” being seen as a rolling symbol of independence and freedom, combining comfort, performance and style living with nature.

The residents can feel “an architecture of four seasons”, they can feel the movement of time, and they can appreciate the changes of nature, the enjoyment of climate. 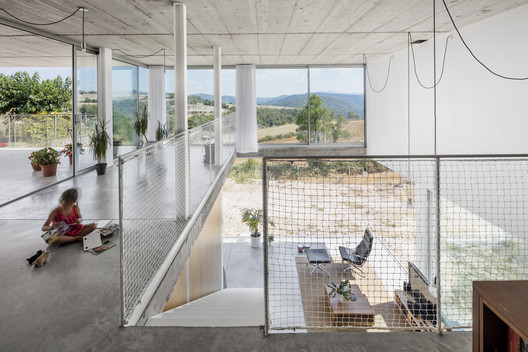